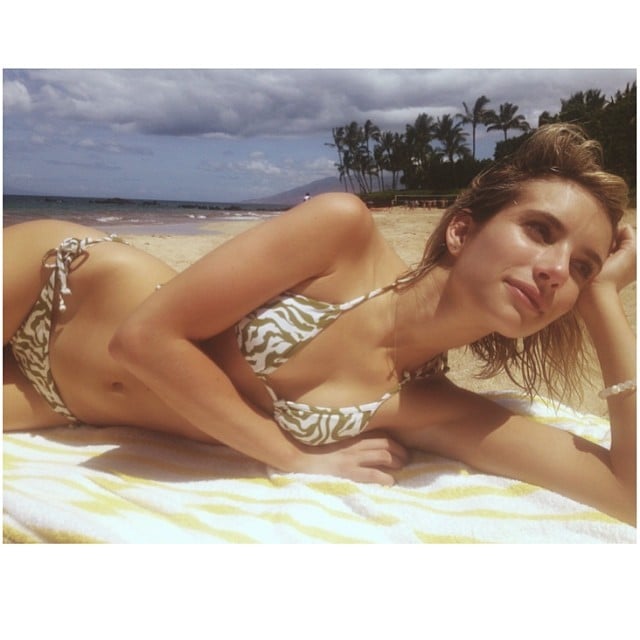 Emma Roberts and fiancé Evan Peters hit the beach in Maui together this week. The cute couple, who got engaged back in January, took a romantic stroll on the sand and cuddled by the water on Tuesday. Emma sported cutoff shorts and a floral headband and showed off her abs in a striped bikini top. She also shared a snap of herself lounging on a beach in a different two-piece on Instagram, saying, "Wish you were here." Emma and Evan likely headed to Hawaii to attend the Maui Film Festival, but also take advantage of their downtime between multiple projects. Emma stayed busy promoting Palo Alto alongside James Franco and director Gia Coppola last month and was also on hand to support her man at the premiere of his action film X-Men: Days of Future Past in NYC. They are also both gearing up to begin filming the fourth season of American Horror Story, which will be set at a carnival in 1950s Florida. Scroll through to see all the cute beach photos of Evan and Emma, and get all the details on their upcoming gigs in American Horror Story: Freak Show.

Kendall Jenner
Kendall Jenner's Hibiscus-Print Bikini Is Still in Stock, but Don't Quote Us on That Later
by Sarah Wasilak 6 days ago

Celebrity Instagrams
The Highlight of Tracee Ellis Ross's Beach Party For One? Her High-Waisted Lounge Pants
by Chanel Vargas 6 days ago