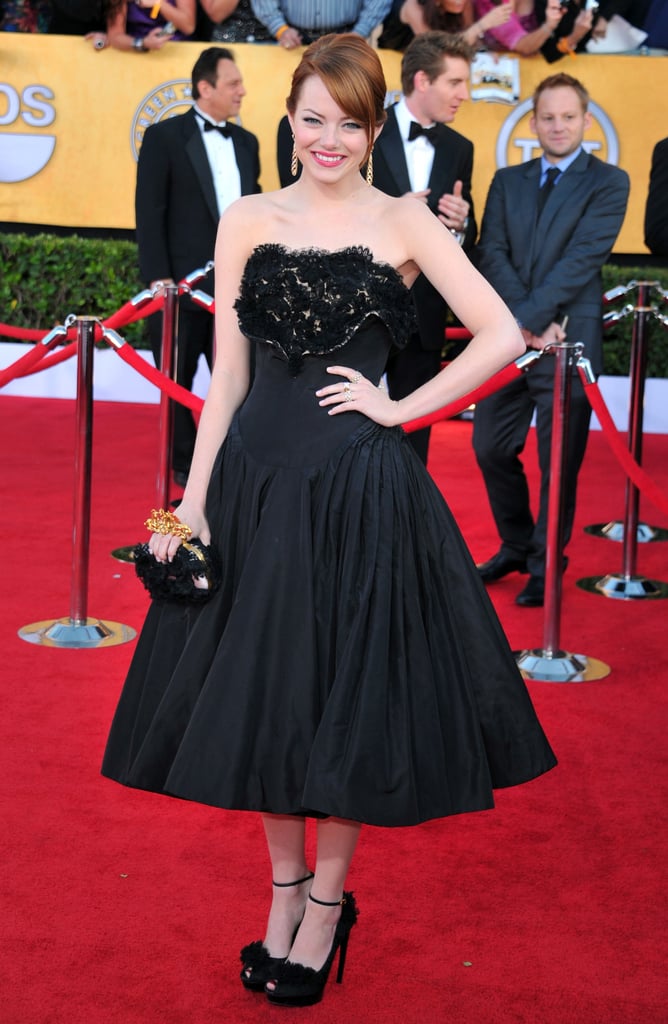 Emma Stone wore Alexander McQueen to join the fun on the red carpet at this evening's SAG Awards in LA. It's a big night for Emma and her many costars from The Help. The whole gang is up for outstanding performance by a cast in a motion picture, and Viola Davis is in the running for outstanding performance by a female actress in a leading role. Jessica Chastain and Octavia Spencer have a friendly rivalry in the best supporting female actress in a supporting role, along with The Artist's Bérénice Bejo, Bridesmaids's Melissa McCarthy, and Albert Nobbs's Janet McTeer. Emma has made many award season stops so far, hitting the Golden Globes, the People's Choice Awards, and the Critics' Choice Awards. Nonetheless, Emma and her The Amazing Spider-Man costar Andrew Garfield took a quick jaunt to Japan for one of their first press duties. Andrew, who's Emma's real-life leading man, didn't join her for a photo op this evening, but we'll see lots of the duo in the months to come. Make sure to vote on Emma's SAG look, and more, in our love it or hate it polls!

Previous Next Start Slideshow
Emma StoneSAG Awards
Around The Web

SAG Awards
Here Are All the Movies and Shows Nominated For the 2021 SAG Awards!
by Kelsie Gibson 2 weeks ago