The stars of Showtime, the CW, and CBS came together at their TCA party in Pasadena last night. The Huntington Library was bursting with celebrities from all three networks who mixed and mingled at the gorgeous venue. Ashlee Simpson-Wentz looked perfectly petite in her sexy dress as she told us about how well-behaved Bronx is these days. Peter Facinelli and Jennie Garth both had shows to promote, though Peter was also happy to chat about feeling like Robert Pattinson at Twi-Con and heading back to work in Vancouver today! 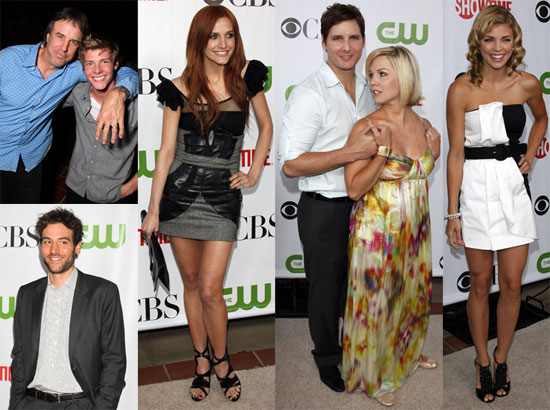 Weeds hottie Hunter Parrish was happy to joke around about not having any sexy scenes this week though admitted that his comments about High School Musical were totally blown out of proportion: "You know what's funny? I talked about that three years ago when it was relevant and now that it's not relevant at all everyone's talking about it." AnnaLynne McCord is always a blast to chat with and she was so excited to dish on the new season and her desires for a Gossip Girl crossover. Check out all the quotes after the jump and more coming soon!

To see lots more from the party and read what Peter Facinelli had to say about Rob, Ashlee about Bronx, and AnnaLynne about Gossip Girl just read more.