We all let out a collective "awwwww" when we first saw the Nicole and Harlow People cover and now we have a look at the full inside spread. I don't want to jump the gun, but seriously, she's gotta be one of the cutest little munchkins ever and Nicole and Joel look so great (especially her hair) coo-ing over their baby. The whole photospread is unbelievably sweet and the interview from the new parents is just as heartwarming. Can you tell I love it or do you need me to gush more? Here are some highlights: 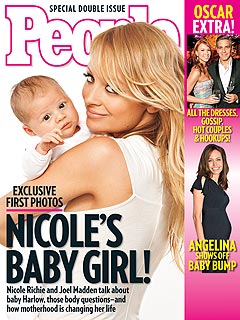 Who was the first to cry?
Nicole: I cried right away.
Joel: Right when she came out, you know that cry that's like an internal cry where you shake a little bit? [To Harlow] You made me cry!

How did you pick the name?
Nicole: We couldn't agree. I wanted a hippie name and he wanted a more Biblical name.
Joel: I really like Jean Harlow the actress, and she likes Shalom Harlow the model. Harlow's cool because it feels like a classic name.
Nicole: And no one has it.
Joel: Winter was so serene and quiet and that's how she is.
Nicole: I always liked the name Kate, but I knew I'd never name my kid that because it was just too plain.

Do you have help at home?
Joel: We don't have a nanny. We have our moms. They've helped us a lot.
Nicole: And we have to give credit to Benji [Joel's twins brother]. He lives six houses down. He babysits, like really babysits.
Joel: There was a day when I'd been at work all day and Nicole hadn't left the house for 48 hours, and I was like, "Let's go to a restaurant down the street," and Benj was with the baby. Then someone said they read somewhere we were out all the time. It's crazy. You leave the house for one hour and eveyone's like, "She's out! She's leaving the baby!"

Has Harlow met Paris Hilton?
Nicole: Yeah. They went to the Ivy. Just kidding. I have to say, all of my friends, their demeanor completely changes when they're around the baby. When they come in the house they're really mellow and careful and sweet with her. And when you're with a baby, you don't think, like, "Oh, I'm this person." She spits up on you and throws up on you and goes to the bathroom and passes gas.

Have you talked about how you want to raise Harlow?
Nicole: Joel joked my whole pregnancy that he thought he would be the strict parent because I'm so laid back and free-spirited.
Joel: And she's the strict one!
Nicole: And since she was born, I've been so protective. Now Joel's like, "I'm going to be the fun parent!"
Joel: Nicole can tell the difference between a whine and a cry. I'm like, "Oh, she's making a noise, I gotta go in there." And Nicole's like, "Let her self-soothe for a minute and see how she does."
Nicole: I'm with her all the time. And she was a part of me for so long. I know when something's wrong.

It's funny what a difference a year makes for Nicole and Joel — clearly Harlow is the start of something new and amazing for the young parents. I can't wait to see more of her (and what Nicole dresses her in, of course). I gotta say, this whole thing just makes me smile. 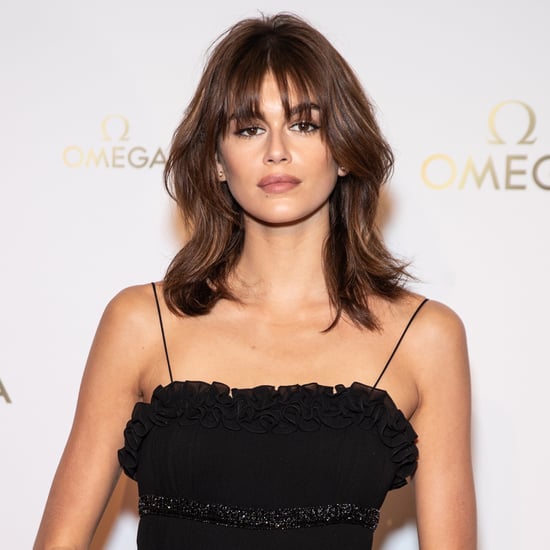 Celebrity Couples
Kaia Gerber and Austin Butler Are Reportedly Dating, and They Make Quite the Good-Looking Pair
by Yerin Kim 4 weeks ago