Angelina has been all over talking about her relationship with Brad, their children, and even how they fell in love. If we didn't know the details of how their relationship came to be, we would think they were the perfect couple. Unfortunately, while Brad and Angelina are jetting around the world with their happy family, Jen has just gone through yet another break-up. We knew the tabloids would eat this up so while Brad and Angie are all smiles, evidently Jen's friends are talking about how worried they are about her. US Weekly reports: 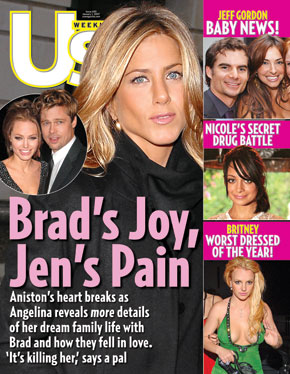 When Aniston was still just dealing with the reality of her ex-husband’s new romance, long-time pal Kristin Hahn confided to Vanity Fair in September 2005, “My worst fear is that Jen will have to face them having a baby together, because that would be beyond beyond painful.”

And Aniston, who has said of kids, “Ideally, I’d like to have a couple,” broke down and looked “stabbed in the heart” talking to VF about a rumor of Jolie’s pregnancy.

Now it’s for real – and on the Internet, in print and on TV. "The Shiloh pictures kill Jen,” says one Aniston source of the pricey pictures, which also feature the couple's son, Maddox, 5, and daughter Zahara, 23 months.

Adds a second Aniston source, who says that Aniston was warned that Pitt, 43, and Jolie, 31, would soon release this second round of family pictures: “She is so torn-up about the fact that Brad was able to move on and has a perfect family life with that witch.”

Jen's friends obviously aren't fans of Angelina. It's good that Angie finally came out and told her side of the story, but it's hard to judge while only knowing bits and pieces. Still, we hope that Jen is able to move on from this. Luckily, she has good friends who are looking out for her.