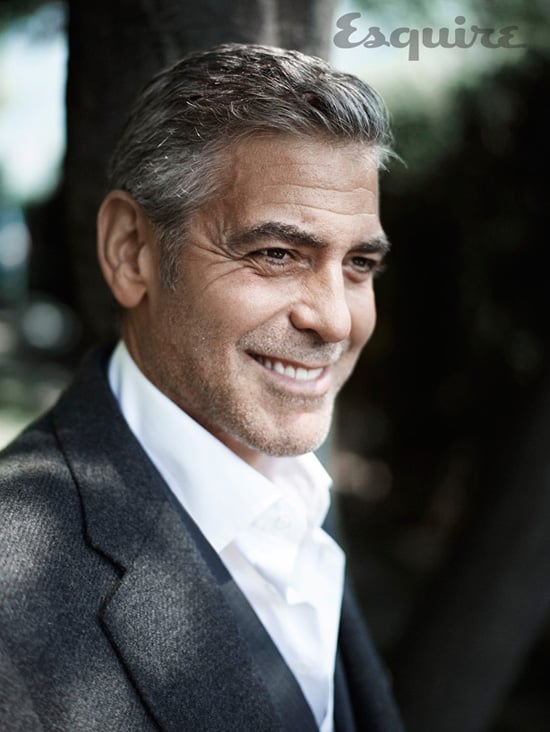 George Clooney got very candid about his celebrity friends (and not-quite-friends) in a new interview for Esquire's December 2013 issue. The actor opened up about his feud with Russell Crowe, saying, "[Crowe] did send me a book of poems to apologize for insulting the shit out of me, which he did. He picked a fight with me. He started it for no reason at all. He put out this thing saying, 'George Clooney, Harrison Ford, and Robert De Niro are sellouts.' And I put out a statement saying, 'He's probably right. And I'm glad he told us, 'cause Bob and Harrison and I were also thinking about starting a band, which would also fall under the heading of bad use of celebrity.'" Russell previously sang in his own band, 30 Odd Foot of Grunts. George continued, "And that's when he really went off on me. 'Who the f*ck does this guy think he is? He's a Frank Sinatra wannabe.' He really went after me. And so I sent him a note going, 'Dude, the only people who succeed when two famous people are fighting is People magazine. What the f*ck is wrong with you?'"

George also talked about a game of basketball he played with Leonardo DiCaprio, which he thought revealed something about the A-list star. Apparently, one of Leo's friends, named Danny A, whom George described as "this club kid from New York," talked smack to George ahead of the game, pretending that he had beat him during a previous match. As George tells it, he ultimately beat Leo and his crew, 11-0, which got the actor thinking about the type of people that Leo surrounds himself with. George said, "The discrepancy between their game and how they talked about their game made me think of how important it is to have someone in your life to tell you what’s what. I’m not sure if Leo has someone like that.” 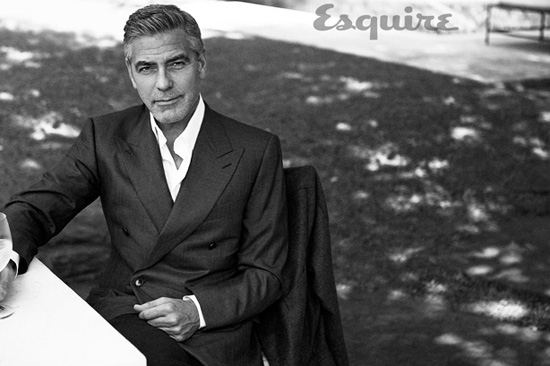 George also compared Leo to his friend Brad Pitt and used the comparison to praise Brad for being a stand-up guy. He said, "For a long time now, Brad has been the biggest movie star in the world. He's bigger than me, bigger than DiCaprio. And I really admire how he deals with that. It's not easy for him. But he tries to be the most honest version of Brad Pitt that he can be. And he also remains unavailable. He's still a giant movie star because you can't get to him. That doesn't mean that I don't think of him as incredibly talented and smart and all those things. But you also can't get to him."

The idea of being somewhat unavailable and unreachable is an important one to Clooney, who apparently isn't a fan of the social media-obsessed, laying-everything-out-there culture that has popped up over the last five years. When talking about Twitter, George scoffs at the idea that any famous person would be on Twitter, saying, "Why on God's green earth would you be on Twitter? Because first of all, the worst thing you can do is make yourself more available, right? Because you're going to be available to everybody. But also Twitter. So one drunken night, you come home and you've had two too many drinks and you're watching TV and somebody pisses you off, and you go 'Ehhhhh' and fight back. And you go to sleep, and you wake up in the morning, and your career is over. Or you're an asshole. Or all the things you might think in the quiet of your drunken evening are suddenly blasted around the entire world before you wake up."