Jennifer Aniston and Gerard Butler are back from their whirlwind European tour promoting The Bounty Hunter on red carpets in many countries — but it's one behind-the-scenes photo from Paris that still has people talking. In this shot it looks an awful lot like Gerard is getting handsy with Jennifer Aniston, though he denies that there was any frisky business. During a radio interview this morning, Gerard played it coy about the photo and their relationship, saying: 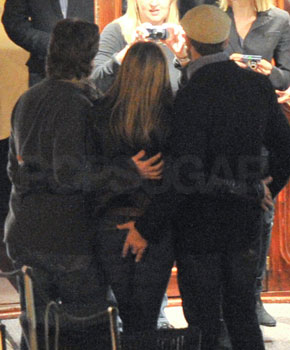 So what do you think of his answer — fair explanation and everyone's reading too much into it or still think he was totally touching her?

Nostalgia
No Longer on a Break: Here Are the Biggest Things We Learned From the Friends Reunion
by Grayson Gilcrease 3 weeks ago

Nostalgia
Jennifer Aniston Lists Brad Pitt as One of Her Favorite Friends Guest Stars: "[He] Was Wonderful"
by Monica Sisavat 3 weeks ago

Nostalgia
Yup, You Can Stay in Monica and Rachel's NYC Apartment From Friends For Just $20!
by Haley Lyndes 5/13