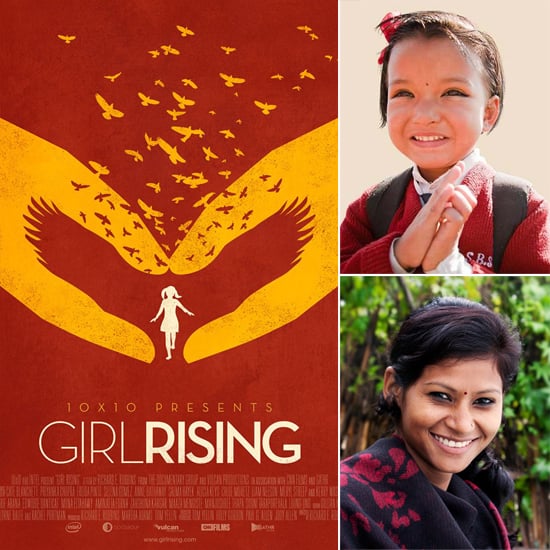 Have you heard about Girl Rising? If not, let me introduce you to an engaging and emotional movie that will teach you a lot about girls' education. The project began when a team of veteran journalists decided to investigate one question: how do you end global poverty? Girls' education always came up, no matter whom they asked, and they knew there was a story to tell. But while data show when you educate a girl you can change a community, they struggled with how to get people to recognize and act on the opportunity. So they created 10x10, a social action campaign dedicated to getting the word out, and the film Girl Rising. Today, in honor of the UN's International Day of the Girl, people are organizing screenings of the film in their communities. In more than 150 countries, Girl Rising supporters are hosting more than 2,000 events. Let's take a look at how your new favorite film got made.

With the help of Oscar-nominated director Richard Robbins, corporate sponsor Intel, and a handful of NGOs on the ground, Girl Rising became a movie like no other. It's not a documentary, nor fiction, but a powerful piece of storytelling. Girl Rising follows nine real girls from different developing countries who each has overcome common barriers to education, including sex trafficking, child slavery, or early marriage. The filmmakers asked award-winning writers to each create a vignette about the girl from her own country. Those stories were then used as the screenplay and narrated by famous actresses. And in the film, each girl, not a professional, acts out her own story.

According to Holly Gordon, the film's executive director and executive producer, Girl Rising was first imagined as a classic documentary. But when the original footage only captured the dark and depressing side of poverty, they decided to get creative to convey a hopeful message. After selecting award-winning writers, they next looked for the actresses to lend their voices to the project. "We asked actresses who had already given themselves to the rights of women and girls," Holly told me. The first person they asked? Meryl Streep. "I got the phone call in July, when I was on a Bolt Bus from New York to Washington, that Meryl Streep had said yes, and I shrieked with glee," Holly recalled. "When you have Meryl Streep on board, others know that's a stamp of approval for your project." Anne Hathaway, Kerry Washington, Alicia Keys, Selena Gomez, and more soon jumped on.

To learn more and see the trailer, just keep reading.

The Plan For Action

The film's makers and other backers hope it has an impact beyond the movie theater, and they've set up a process to make that happen. The first goal is to make sure as many people as possible see the film. 10x10 partnered with Gathr, which lets you request and attend theater screenings that otherwise would not be available in your area. They're also showing Girl Rising to crucial policy influencers. Producer Holly explained: "We screened a chapter at Davos, and there were tears and applause and a line around the corner to talk to the folks who were there representing Girl Rising. In a few weeks, we'll be showing the film at the World Bank to an annual meeting of global leaders around the world."

I also spoke with Shelly Esque, president of the Intel Foundation, an important partner of Girl Rising. She explained the movie will also be paired with practical policy advice. Intel is creating tool kits that countries can use to assess their policies for girls. They're also going to hold action-plan workshops in various countries. While the team works on the international release, Shelly said, "We've been able to show it in a couple countries. For instance, in Uganda we showed it with just a small group, and the first lady of Uganda. She immediately said, 'I'm forming a task force on girls' education.'" It's clearly in each country's interest, Shelly explained, considering "just another 10 percent of girls staying in secondary school another year raises a country's GDP by three percent."

There's also a call to action for everyday women who are moved by the film. 10x10 wants you to donate to its fund or directly to its NGO partners who work for girls' education, which include Girl Up, Partners in Health, Room to Read, La Pietra Coalition, Pratham, Plan, World Vision, Care, and Girls Learn International. Holly told me, "If you want to donate and know that you made a difference, you can go to girlrising.com." She also suggests holding a book club that explores these issues or throwing a bake sale to raise money for your local women's and girls' organizations. "What we'd like is that your action reaches more people or raises more money."

As for how the nine girls in the movie feel about it, Holly said they're "a little mystified" their stories are being told. But Holly says the girls are not necessarily extraordinary. "They're determined. They're full of hope and courage. But we found that again and again. The idea of the film is to highlight these girls as representative of the 66 million girls who aren't in school today."

If you want to know more about Girl Rising, check out the trailer below, as well as the Girl Rising Facebook page.