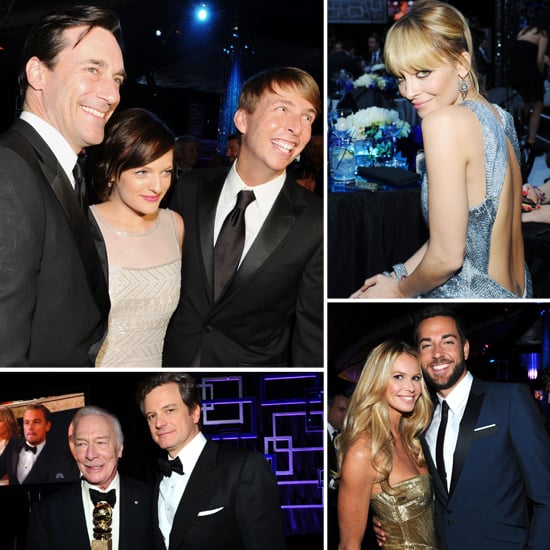 NBC hosted a post-Golden Globes bash last night at the Beverly Hilton Hotel in LA. Best supporting actor winner Christopher Plummer made the rounds with his newly-acquired statue, and he said hello to last year's best actor champ, Colin Firth. Colin made the rounds with wife Livia, who's known for wearing green fashions on the red carpet. Yesterday, Livia was decked out in a dress made of recycled plastic bottles that had been designed by Giorgio and Roberta Armani.


Mad Men buddies Jon Hamm and Elisabeth Moss said hi to NBC actor Jack McBrayer, who plays Kenneth the Page on 30 Rock. Fashion Star ladies Nicole Richie and Elle Macpherson also made the rounds at the network's party. Elle seems to have made some new friends, including Chuck's Zachary Levi! Other NBC friends like Whitney cutie Chris D'Elia and Kristen Wiig, with Bridesmaids buddy Wendi McLendon-Covey, mingled as well — click through to see who turned out!