Just a few days into the US government shutdown, the Internet, newspapers, and comedians have inevitably responded with some funny and snarky tweets, videos, and pictures that have already gone viral. While some wonder whether Congress is just in mourning over the Breaking Bad series finale, others believe the shutdown is cause for another Miley Cyrus parody. Even Britney Spears has some words for Congress: #WorkBxxCH. From today's newspaper covers to The Daily Show's bit to comedians sharing their funny takes on Twitter, check out the Internet buzz in the wake of the government shutdown.

Go call the po-lice, Go Call The Gu-vunah! Someone tell Congress to get to #WorkBxxCH

Following the premiere of her new "Work B**th" music video, Britney Spears took to Twitter to tell Congress to get back to work. 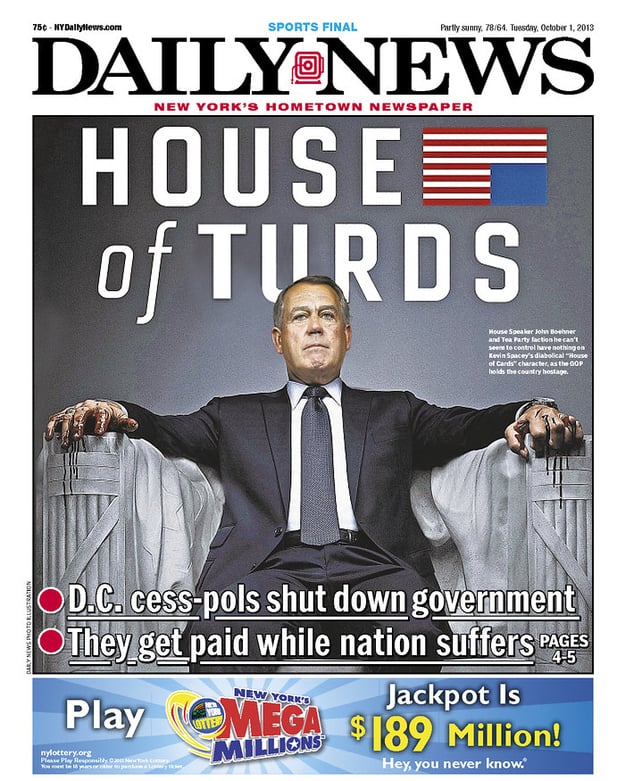 On Tuesday morning, the cover of the New York Daily News went viral. With a "House of Turds" headline, an upside-down American flag, and John Boehner replacing Kevin Spacey with his hands red and bloody on the Lincoln Memorial, the image created a buzz of its own. It's a perfectly absurd play on Netflix's House of Cards.

It was only a matter of time before the shutdown got the Miley Cyrus parody treatment.

Keep reading for more Internet reactions to the government shutdown.

On The Daily Show, Jon Stewart turned to sports analogies for his take on the government shutdown, and his football-related rant quickly went viral: "Did you see the Giants game on Sunday? They lost 31-7. Do you know what the Giants didn't say after that game? 'If you don't give us 25 more points by midnight on Monday, we will shut down the f**king NFL.'"

The government #shutdown, in Emoji pic.twitter.com/ZUkJPV3aUA

USA Today took to Twitter to tell the story of the government shutdown — in emojis.

Now that the government is shut down, what time do you guys want to go loot Costco?

Wow, congress isn't taking the end of "Breaking Bad" very well at all.

Hey guys - I'm about to shut the government down on the west coast so if you need anything, ask MexiCanada

You can shut down the government, but you can't shut down my Twitter fe

Weirdly, I feel more at ease with the Governement shut down.

On The Colbert Report, Stephen Colbert counted down to the shutdown with a segment called "Rockin' Government Shutdown Eve." Sigh.