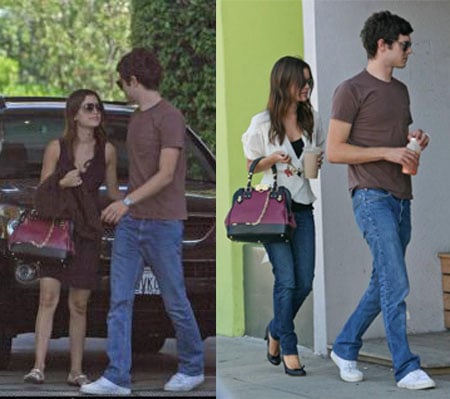 Rachel and Adam celebrated her 25th birthday this weekend with her family. The super cute couple just go about their day ignoring the cameras as if they are just regular folk. Rachel recently admitted it's part of her job dealing with the paparazzi. She said, “Well for me I don’t have it nearly as bad as a lot of other girls out there and that just comes along with it and you can’t really get it let to you. You know that it’s a part of it and you leave it at that as you can’t make it a part of your life. It’s just out there and it’s going to be out there and that’s inevitable.” The actress, who won’t comment on the status of her relationships, says she does try to protect her privacy.” I just think it’s important to lay low, because what’s personal to you, you want to keep personal because everything else of you is so exposed.” The actress protects herself from the prying media, by not “putting too much of yourself out there, because then they’ll know you as you and it becomes harder to believe you as a character.”

Adam Brody
Adam Brody on The Kid Detective's Mind-Boggling Ending: "It Stayed With Me"
by Kelsie Gibson 10/18/20