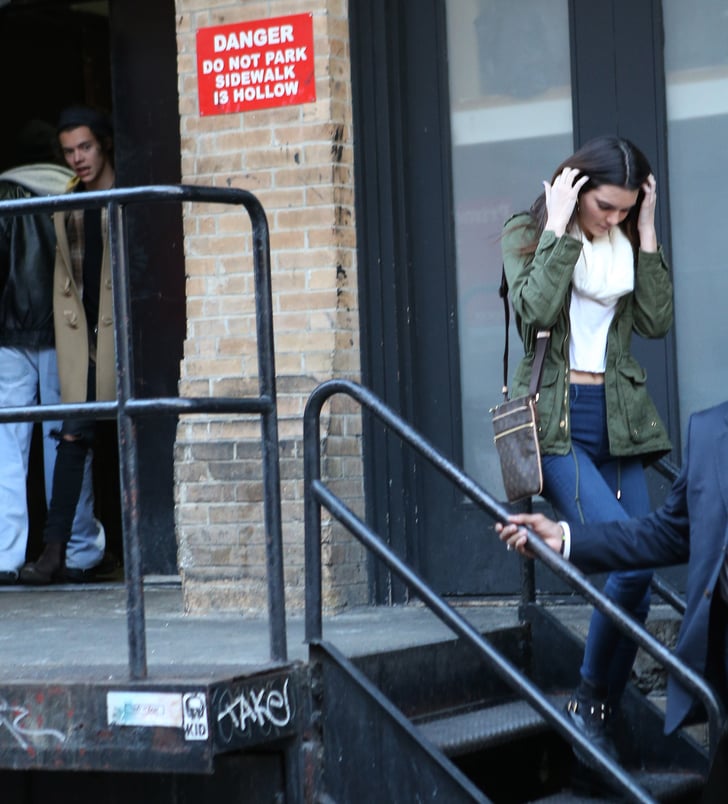 Harry Styles and Kendall Jenner were spotted leaving a hotel in NYC on Saturday, the same day they reportedly went on a date to a gay bar together. The meeting, which was for the bar's "Gays Gone Wild" event, only furthered rumors that the teenagers might be more than just friends. The two exited the building through a back entrance, walking at a close distance. Harry and Kendall were first seen together last month, when they left a restaurant in West Hollywood after a dinner date.

Harry has partially denied that the two are an item, saying in a recent interview, "We just went out to dinner, so, no . . . I guess. I don't know." Meanwhile, Kendall also went on the record about their relationship, telling a reporter, "No story — we're friends. He's cool." Both Harry and Kendall attended the American Music Awards last month but were not seen together. Harry hit the red carpet and stage with One Direction, and Kendall arrived with Kylie, her younger sister. The two have been on opposite sides of the pond in recent weeks. Harry attended The Class of '92 premiere with his bandmates in London. Meanwhile, Kendall and her family made headlines when they posed for their annual Kardashian family Christmas card.

Kendall Jenner
Kendall Jenner Talked Anxiety With a Psychologist, and It Felt Like My Own 11-Minute Therapy Session
by Perri Konecky 1 week ago

Kendall Jenner
Kendall Jenner's Hibiscus-Print Bikini Is Still in Stock, but Don't Quote Us on That Later
by Sarah Wasilak 1 week ago
Harry Styles
We're Not at All Jealous of These Pics of Emma Corrin and Harry Styles Filming My Policeman
by Grayson Gilcrease 3 days ago