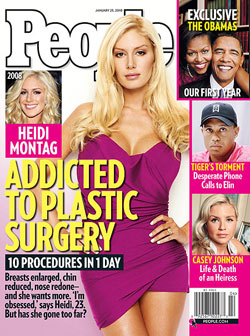 Heidi Montag is on the cover of this week's People discussing her latest plastic surgery. The issue also coincides with the release of her new Superficial album, which became available online Tuesday through iTunes. She apparently underwent 10 operations last November, including a chin reduction, another nose job, liposuction, and more. It's dramatic, for sure, but it's not the first time Heidi has gone under the knife. Nor will it be the last, apparently. "For the past three years, I’ve thought about what to have done," she said. "I’m beyond obsessed." So, tell us what you think about Heidi's transformation — good for her or WTF?

Heidi MontagPeople
Around The Web

People
Kelly Ripa and Mark Consuelos Have "Softened Up a Lot," According to Their 3 Kids
by Murphy Moroney 8/16