Johnny Depp got lots of laughs at the press conference for his new movie Rango in LA yesterday. The actor was joined by his costars, Abigail Breslin and Isla Fisher, as well as director Gore Verbinski at the Four Seasons in Beverly Hills. Johnny plays the movie's title character, a pet lizard who is forced to save the day after a lie gets him in over his head. Johnny admitted that his own kids aren't all that interested in his career, and are far more into Family Guy and Justin Bieber. It turned out that Justin happened to be in the hotel, heard that Johnny mentioned him, and dropped by to say what a huge fan he is in the middle of the press conference! Johnny joked, "What am I going to tell my daughter?" Johnny, who was as gracious and funny as you might expect, also talked about tackling the challenge of playing a reptile and the reason he enjoys making movies for children. He said: 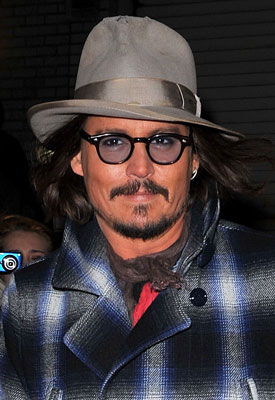 To read the rest of Johnny's interview, just read more.