J Lo Thought it was Her Wedding This Weekend

J Lo and Marc left Rome yesterday after getting in some shopping at Dior. She was all smiles as she posed for pictures with fans and signed autographs. However, her diva-like behaviour followed her overseas. Even though J Lo was a guest at Tom and Katie's wedding apparently she was acting like she was the center of attention. US Weekly reports: 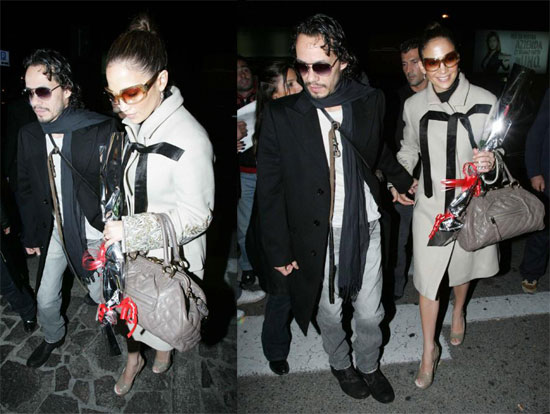 Tom Cruise and Holmes kindly arranged for a private plane to bring some of their more famous friends to Italy for their wedding. But a source tells Us Weekly that, hours before Jada Pinkett Smith, Leah Remini and Jerry Maguire director Cameron Crowe boarded the chartered 757 to Rome, “Jennifer Lopez sent her assistant to secure seats by laying her belongings on all the best seats!”

Lopez also flew her hairstylist, Ken Pavés, into Rome and set him up at the posh Hotel Hassler to do her hair for the big day.

Meanwhile, it’s supposed to be the bride’s special weekend, but the singer made sure that all eyes were on her at a group dinner at the restaurant Nino on Thursday night. Says a source, “The November 16 welcome dinner was supposed to be casual. But J.Lo, of course, wore a gown. So much for casual.”

And the special treatment didn’t stop there. At 2:33 a.m. in the wee hours after the wedding, Lopez, 37, had a waiter sneak two doggie bags to her and husband Marc Anthony, 38, as they were on their way to the airport to return to the States.

Looks like J Lo can't get away from this label. She did look really nice though. However, let's hope that this is Tom's last wedding because it's doubtful she'd be invited to the next one! For more pics just read more Jennifer Lopez
Just in Case You Doubted That Shag Haircuts and Bangs Are Back, Jennifer Lopez Now Has Both
by Jessica Harrington 1 week ago