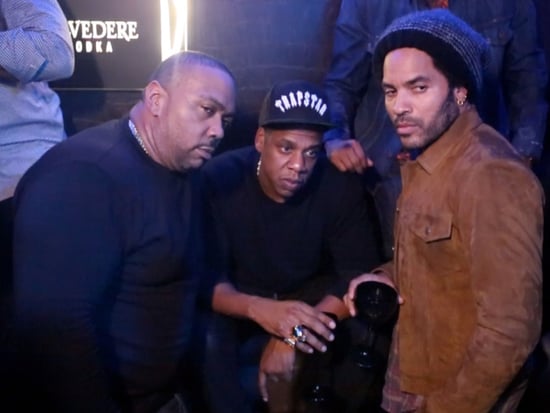 Jay Z celebrated with a couple of famous friends after his Paris concert on Friday night. After hitting the stage at the city's Palais Omnisports de Paris-Bercy, Jay Z joined pals Timbaland and Lenny Kravitz at the 79 Club for his official afterparty. Jay has been in the City of Light all week as part of his Magna Carta Holy Grail world tour but will soon be heading to Switzerland for a performance on Sunday night. Before his string of shows in France, he linked up with his wife, Beyoncé Knowles, for a romantic dinner date before she jetted off to New Zealand to continue her own overseas tour. While in Auckland, Beyoncé showed her daring side by going bungee jumping from the Sky Tower. It seems like Jay was right when he recently called his wife "a gangster."

Fashion Week
No, It Doesn't Get Any Cooler Than Lenny and Zoë Kravitz's Father-Daughter Style
by Nikita Charuza 2/26

The Tonight Show Starring Jimmy Fallon
Of Course Lenny Kravitz Nailed His Last-Minute Speech at Zoë's Wedding: "I Was in Tears"
by Kelsey Garcia 2/13