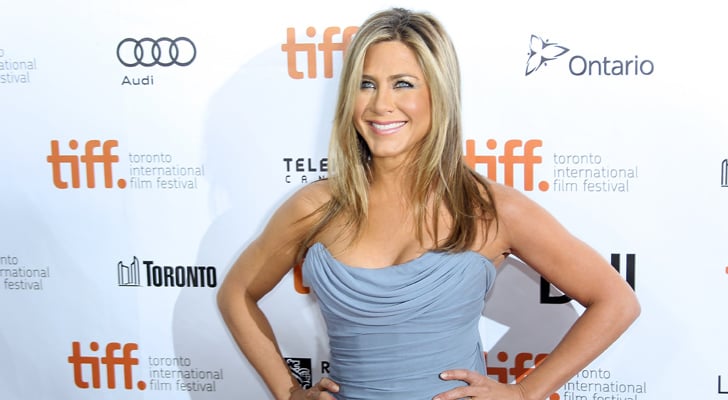 Jennifer Aniston got a chance to interview feminist icon Gloria Steinem at The Makers Conference in Palos Verdes, CA, on Monday, and while the focus wasn't on Jen, she did get a chance to share her own thoughts on feminist issues. Jennifer opened the public Q&A by proclaiming that she's "an actress, not an interviewer" but that she had to jump at the chance to interview "trailblazer, goddess, and friend" Gloria. While Gloria mostly talked about her experiences in the women's movement and her thoughts on the state of women's issues today, Jennifer hinted that she is fed up with the focus on her marital status and whether she is or is not pregnant:

"The public has a great interest in our personal lives. I know you've come up against this, and I certainly have too — where being a woman and our value and our worth is basically associated with our marital status or whether or not we have procreated."

To which Gloria responded:

"Well, I guess we're in deep sh*t. I accepted it for a long time, and I thought, 'Well, OK, I'm getting married, and I'm having children. I'm definitely doing that. Just not right now. I'd put it in the future. And then, fortunately, the women's movement came along and made me realize I was actually happy. And that there were more ways to live than one. So it came as a great revelation."

Interestingly enough, Jennifer's chat with Gloria came right before her 45th birthday. While Jennifer reportedly stayed in LA on Tuesday for her big day, her fiancé, Justin Theroux, stayed in NYC, where he is currently filming The Leftovers. On Tuesday night, he fit in a bit of fun by attending a store opening with friend Scott Campbell and Romeo and Juliet star Orlando Bloom.