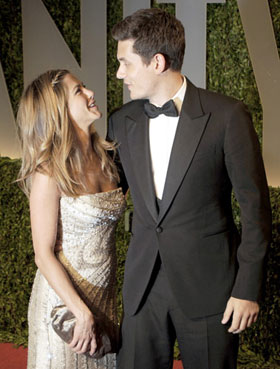 John Mayer has been occupied with his new music, but that's not the only thing keeping him busy — he's apparently rekindled his romance with Jennifer Aniston! The duo is rumored to have recently double-dated with her pals Courteney Cox and David Arquette, as things heat up again after their last split in March. We've always wanted to see Jen happy in her relationships, but it hasn't worked before and is also suspiciously timed with John's upcoming album release. So tell us your thoughts — is their getting back together a good or bad idea?

Emmy Awards
Jennifer Aniston, Courteney Cox, and Lisa Kudrow Had an Adorable Friends Reunion at the Emmys
by Kelsie Gibson 3 days ago