Billy Bush is an ass. He interviewed Jeremy Piven at the Emmys Sunday night and asked all the wrong questions. Billy chose to continuously ask him if he had seen Hollywood's mysterious babies like Suri and Shiloh instead of talking about his big nomination. Click here to check out this awesome video of the awkward moment where Jeremy really puts Billy in his place! Here's more on the awkward moment between Billy and Jeremy: 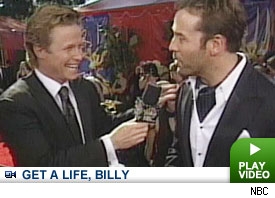 During the red-carpet prelude to the Emmys, "Access Hollywood's" Bush corralled "Entourage's" Piven, and began a line of questioning concerning celebrity babies. Piven had just flown in from Arizona, where he was shooting a movie with Jennifer Garner, and so Bush asked him about Garner's baby Violet.

Bush then asked Piven if, given that Piven lives in Malibu, whether he had laid eyes on Brangelina's baby Shiloh. Piven said he hadn't, explaining that he had "116 other things to do...I don't go hunting for celebrity babies, thank you, Billy."

Undeterred, or clearly not getting the message, Bush then asked if he'd seen Suri Cruise. Piven finally lost his patience. "You need another job. You have potential as a human being," said Piven, not at all hiding his irritation. "This may not be right for you. Seriously -- can you focus on other things?"

In related Piven Emmy news, R&M report that after he won the prize as best supporting actor, he accidentally cut himself on the chin while kissing his Emmy. It wasn't until he kissed someone else and got blood all over their face that he noticed. Eww, gross.