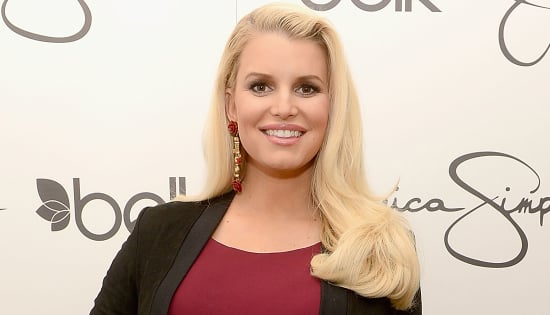 Jessica Simpson has a new addition to her family! She gave birth to her second child with Eric Johnson on Sunday. Her rep told Us Weekly, "Ace Knute (pronounced Ka-nute) Johnson has arrived! Mom and baby are doing great. Jessica, Eric, and Maxwell are thrilled to welcome the new addition to their family." Jessica revealed back in December that she was pregnant with her second child after nearly a month of speculation. Her pregnancy made headlines as she had given birth to Maxwell in May of last year.

Jessica has been laying low in the final weeks of her pregnancy, but she did find time to attend her friends Kathryn Sykora and Chris Hetherington's wedding in San Diego earlier this month alongside pregnant pal CaCee Cobb. Now that she has given birth, Jessica will reportedly start focusing her attention on planning her wedding to Eric, which has continually been put off by her babies. Back in May, Us Weekly reported that Jessica wants to get married a few months after the baby is born. Congratulations to the happy family!

Giambattista Valli
How to Dress For a Movie Premiere Theme, as Taught by Jaden and Jada Pinkett Smith
by Victoria Messina 3 weeks ago