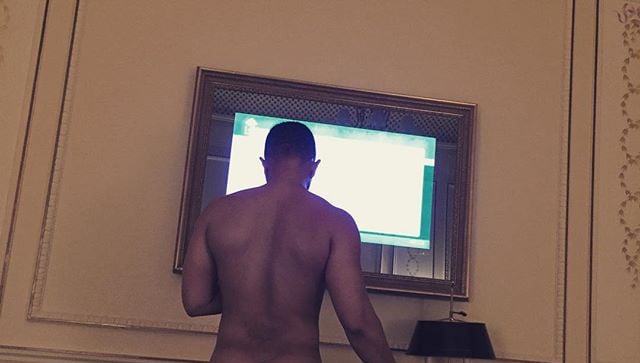 #RelationshipGoals? Chrissy Teigen took to Instagram on Tuesday to show off her husband's goods. As a fully naked John Legend appeared focused on something near a desk, Chrissy snapped a picture of the Oscar winner's behind from bed. Although Chrissy's knee blocks part of the view, there's still plenty of the singer to appreciate. "@Instagram," Chrissy captioned the photo, seemingly daring the social media channel to remove the snap.

As Chrissy's Instagram followers know, this is far from the first time she's given the public an intimate glimpse of her relationship with John — the supermodel and singer showed off their funny day in bed back in May, and things were slightly more flirty during their sexy anniversary in Paris last September. Keep reading to see the full shot of John Legend's butt, then check out the fun couple's cutest pictures.

Celebrity Instagrams
Naomi Ackie Powerfully Reacts to BAFTA Nod: The "Embracing of Joy Is a Small Act of Rebellion"
by Brea Cubit 7 hours ago

Dwayne Johnson
Dwayne Johnson Seemingly Calls Out President Trump in Impassioned Video: "Where Are You?"
by Monica Sisavat 9 hours ago

Celebrity Instagrams
In a Powerful Moment, Amber Riley Led a Sing-Along to Beyoncé's "Freedom" at an LA Protest
by Monica Sisavat 1 day ago