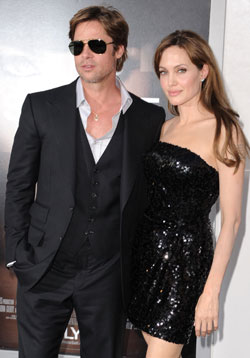 Johnny Depp handsomely covers the January issue of Vanity Fair, and inside the magazine he has plenty of kind words for his The Tourist costar Angelina Jolie. One quote in particular stood out, as Johnny referred to Brad Pitt as Angelina's "husband." It was an interesting word choice considering that rumors about Brad and Angelina marrying have swirled for years, and she recently said, "It's just like we already are [wed]." Johnny and his girlfriend Vanessa Paradis have a similar relationship status, so he could just be using the word loosely. We're curious, though, what you think — was Johnny's quote a slipup or is he really in the know?