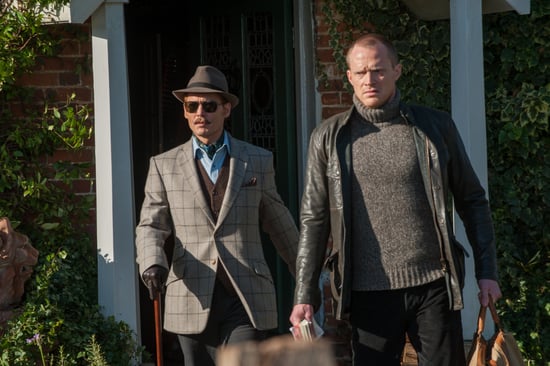 So this is why Johnny Depp has gone blond! We got our first good look at Johnny in his new film, Mortdecai, which is currently filming in London. The new photo shows Johnny walking with Paul Bettany, whom Johnny had previously starred alongside in The Tourist.

The film follows an art dealer, Charlie Mortdecai, as he hunts for a stolen painting that is said to hold a secret code that can lead to a Nazi gold stash. The film is based on the popular Mortdecai Trilogy, which was written by Kyril Bonfiglioli. Johnny's new project also stars Gwyneth Paltrow, Ewan McGregor, and Olivia Munn.

Superman
It's a Bird, It's a Plane, It's Another Superman Reboot
by Grayson Gilcrease 50 minutes ago

TV
Before You Subscribe to Paramount+, Check Out Its Library of Upcoming Shows and Movies
by Amanda Prahl 3 hours ago

TV
Interested in Signing Up For Paramount+? Here's Everything You Need to Know
by Amanda Prahl 3 hours ago

Movies
Missing the Emotional Saga of The Map of Tiny Perfect Things? Watch These Movies Next
by Ashley Broadwater 4 hours ago