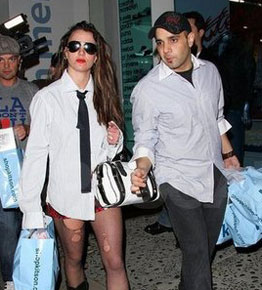 As an overwhelming majority of you seemed to think is the right call, this afternoon the judge named Britney Spears' father, Jamie, as her legal guardian. This means he has control over her assets and legal matters. Jamie shares the responsibility with lawyer Andrew Wallet, so as to have an unbiased independent party involved. This ruling is only temporary and will be reevaluated at a hearing on Monday.

The other upshot from today's hearing is a restraining order against "someone" to stay away from Britney. While it's not explicitly stated, the person in question is Sam Lutfi. The order lasts 22 days after which Britney's parents (assuming they're still in charge) can make it indefinite. Considering he was calling her family "crazy" just this morning, methinks he'll have an angry thing or two to say about all this.