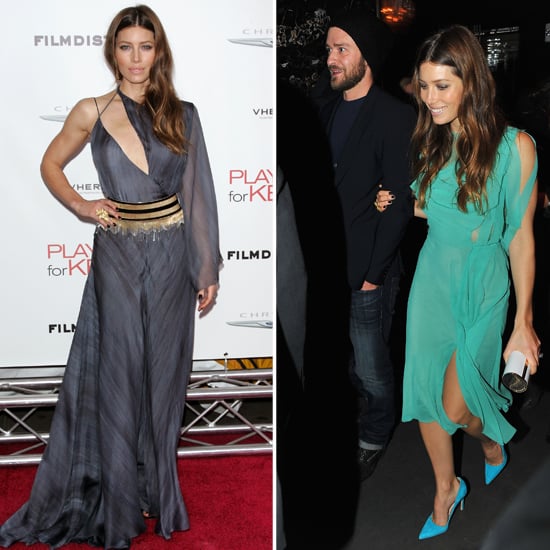 Jessica Biel donned a long Versace gown on the red carpet at last night's NYC premiere of Playing For Keeps. She posed for photos solo, as did her costars in the film Gerard Butler and Uma Thurman. Later, though, Jessica had the company of her husband, Justin Timberlake. Jess changed into a hot mint-green Nina Ricci dress to hit the afterparty at the Dream Downtown with JT on her arm.

Jessica and Justin have spent quite a bit of time in NYC since their Italian wedding back in October. She's done double promotional duty with two films out this season, Playing For Keeps and Hitchcock. In one interview, she opened up about the joys of life when you're married to a guy who can cook. Jessica Biel told Elle, "He bakes pies. He's Southern, so he's got all this influence from his grandma. He does a three-layer pie . . . and blueberry crunch cake, which is pretty unbelievable. It doesn't happen all that often, thank god. Otherwise, it would be a big problem."