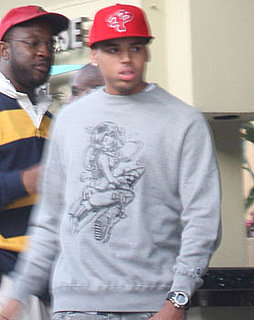 Chris Brown was spotted out in LA on Friday, before his shocking and dramatic Grammy weekend. As we continue to get more details on the assault, friends of both Chris and Rihanna are weighing in on the situation. Yesterday T.I. revealed to Carson Daly that he had spoken with Chris, saying, "He cool, you know. I guess he a little concerned about the situation, but he's still the same Chris."

Ryan Seacrest asked Kanye West for his thoughts during an interview this morning, and Kanye called Rihanna his "lil sis," said he was devastated by the whole situation and that it's nothing any woman should go through. Rihanna's reps have said that the singer is doing well and has thanked her fans for support, but tell us — do you want official statements?

Chris BrownRihanna
Around The Web

Rihanna
Clear Your Schedule, Because Rihanna Is Back With Savage x Fenty's Runway Show Vol. 2
by Chanel Vargas 1 week ago

Music
Cardi B Is a Fan of This Mashup of "WAP" and Rihanna's "S&M," So You Know It's Good
by Yerin Kim 3 weeks ago

Rihanna
Rihanna Told A$AP Rocky Her Skin Type Is "Just as Complicated as Men Are," and Well, Same
by Yerin Kim 8/26