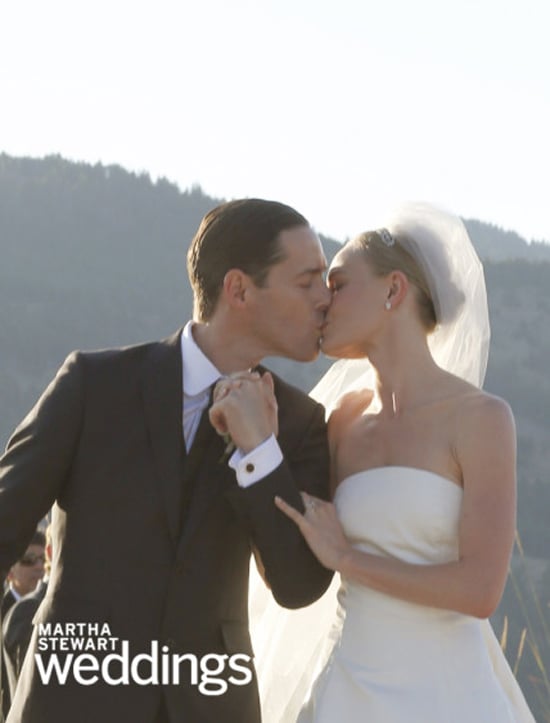 Kate Bosworth and Michael Polish have tied the knot after a yearlong engagement, and Martha Stewart Weddings shared details of the couple's nuptials with behind-the-scenes pictures. On Saturday, the pair was married in an intimate ceremony at The Ranch at Rock Creek in Philipsburg, MT, where both the couple and the guests stayed for the weekend. Family and friends, including Lake Bell, had the chance to ride horses and hike throughout their stay, and they were greeted with welcome bags that included a handwritten note from the couple.

Kate donned two custom Oscar de la Renta dresses for the big day, including a strapless ball gown with an eight-foot train that she wore when she and Michael said "I do." They penned their own vows for the ceremony, which took place on a bluff overlooking acres of rolling hills. For the reception, Kate changed into a floral embroidered tulle dress with scalloped cap sleeves, and the creation of both dresses will be featured in an upcoming Vogue.com video.

The actress first met Michael when she starred in the film Big Sur, which he directed, in 2011. He proposed the following year during a trip to South Korea, and she let it slip that she was engaged when she called him her fiancé in an article that she contributed to Vogue in August 2012. More wedding details will be featured in the Winter issue of Martha Stewart Weddings, which hits newsstands in December. Congrats to the couple!

Celebrity News
Yep, Jodie Turner-Smith and Joshua Jackson Are So in Love, They High Five Each Other About It
by Chanel Vargas 8 hours ago

Celebrity Couples
Why Did Jennifer Lopez and Alex Rodriguez Break Up? Here's What We Know
by Monica Sisavat 10 hours ago

Celebrity News
J Balvin and Valentina Ferrer Are Expecting Their First Child: "The Family Is Growing"
by Monica Sisavat 1 day ago

Pete Davidson
3 Suitors Phoebe Dynevor Has Been Linked to — and No, Regé-Jean Page Isn't on the List
by Emily Weaver 2 days ago

by Irene San Segundo 14 hours ago