Kate's rumored relationship with Owen Wilson is supposedly over. The steamy fun affair, which was part of the reason for the split of her marriage, has fizzled out. We actually like the thought of them together but I guess it was just a fling. Owen is back to his bachelor ways and Kate is already finding new musicians to date. US Weekly reports: 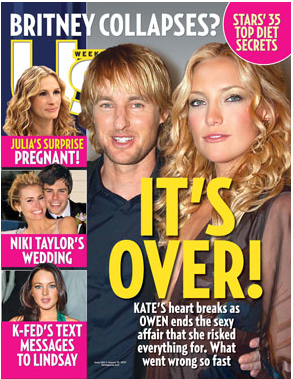 “They have definitely cooled off,” a source close to the actress tells Us of Hudson and Wilson’s summer fling. “She adores him and wishes it had worked out. But it didn’t.”

Seconds a Wilson source, “Owen is calling girlfriends to tell them he is single.”

The actress, meanwhile, is back to dating musicians. She brought Irish singer Damien Rice (whose haunting song "The Blower's Daughter" was the theme of 2004's Closer) to a December 9 birthday party for director Brett Ratner. A Hudson pal assures, “She is exploring everything while trying to get over Owen.”

Of course no one has confirmed anything, but we don't expect that to happen since it's not like Kate and Owen were all that public with their scandalous affair anyway.