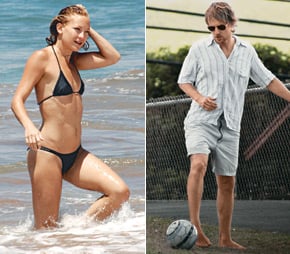 We have seen pics of Kate learning to surf and enjoying the beach in Hawaii but who knew she was really there to sneak in some time with Owen Wilson. We thought she might have been working it out with Chris but looks like she is testing both men. Kate is expected to head to Australia for work soon. We thought she was going to stay under the radar until then but it looks like she just can't stay away from Owen. US Weekly reports 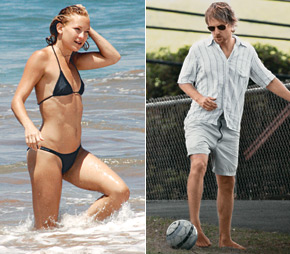 The 27-year-old actress, her son Ryder, 2, and her pals (including actress Sara Foster) checked into the Fairmont Kea Lani Hotel and Resort on September 6. Between beach outings, the actress discreetly slipped away to spend time with Wilson at his Keawakapu Beach pad – conveniently just three miles from the resort. (Reps for both did not return calls for comment.)

“Kate wanted to see how Owen would act with Ryder,” says a close friend of Hudson. “And this weekend was sort of a test.”

On September 8, Hudson and her pals visited Wilsons’ for a party with about 20 friends. The next morning, Hudson was spotted exiting the house in the same white gauze sundress and flip-flops she’d had on the night before. “She loves being with him,” a source says of Hudson and Wilson. “She laughs all the time. They are both funny people. She can’t resist just how good someone like that makes her feel.”

Lots more pics of Kate in Hawaii so read more

Kate Hudson
Kate Hudson’s Engagement Ring Sparkled at the Met Gala, but Did You Notice Her French Manicure?
by Jessica Harrington 9/15/21

Kate Hudson
Kate Hudson's Toddler Loves Her Style, So She's Saving Her Outfits For Her 16th Birthday
by Chanel Vargas 5/06/21