It's been just six weeks since Kate announced she was moving on and breaking up with her husband Chris. It looked like they might reconcile but clearly they are just trying to keep things civil for Ryder. According to US Weekly, a friend of Kate's says she is filing for divorce any day now. Perhaps this is so she can come out of hiding with Owen and they can be an official couple. Here's more: 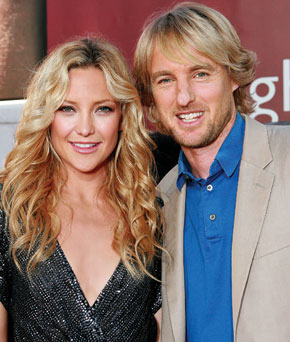 "As soon as she files, it relieves a lot of the pressure of going out with Owen," says a friend of the actress, who has shared dinners, soccer games and a trip to Hawaii with Wilson recently.

The actor "makes Kate laugh," says a source. "She's much more true to herself when she's with Owen." Hudson's still in contact with Robinson about their son, Ryder, 2. "Chris calls and checks in," says the source. "Kate has never been happier." (Reps for Hudson and Wilson had no comment.)