Katie Holmes gave Suri a twirl during a visit to the set of The Kennedys in Toronto with her older sister Isabella yesterday. Suri was being quite the social butterfly, and even made a new friend! Katie was once again decked out in her Jackie O wardrobe, which included at least four different outfits — red, white, and blue included — in one day. Katie left Jackie's classic brown bob behind and opted for curls during a quick trip to NYC on Monday to promote The Extra Man, but was back in character immediately upon her return to Canada. Meanwhile, Tom Cruise was an ocean away flashing that movie star smile as he premiered Knight and Day in Munich with Cameron Diaz. 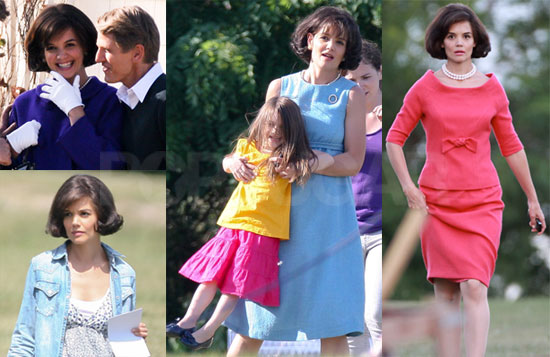 To see more pictures and video of Katie and Suri on set, just read more.