We know that LL spent the long NYE weekend hanging with Scott Storch in South Beach and is apparently doing well staying sober. She was spotted at Miami club Mokai walking around with a can of Red Bull. Apparently she also no longer tolerates the drunken behavior of her friends and even got in an argument with Joe Francis because he was having too much fun hitting on girls. Here's more: 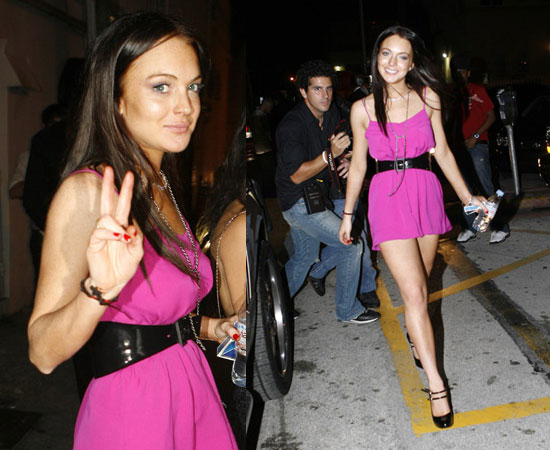 One source said Lindsay was sitting with Francis until he started having too much fun "hitting on girls." Evidently the antics did not sit well with Lohan. "Lindsay gave him a piece of her mind - they had to be physically pulled apart," we're told. Then she went to sit with Butter co-owner Richie Akiva. Later, spies said, she joined up with her new best friend, Scott Storch, and they "sat together and text-messaged each other." The spat with Francis didn't ruin Lohan's holiday. She was spotted at the Delano Thursday with "a whole new entourage" and "spent yesterday tanning with all her friends in her bungalow." Lohan's rep, Leslie Sloane Zelnick, said, "There was no fight with Joe Francis, and they are friends."

More pics of LL in her hot mini on NYE carrying around her trusty water bottle after the jump. While she hosted her own party at the Delano, she was seen here at a party hosted by DJ AM, her ex Wilmer Valderrama and Travis Barker at Mansion in South Beach. Lots more pics of LL and her new BFF Scott Storch so read more