Lindsay Lohan may (finally) be laying low in rehab (I swear, she hasn't been shopping for days!) but that doesn't mean she has fewer cravings. It's what (or shall we say who) she's craving, however, that may be a little surprising. Through your brilliant powers of deduction (and the big picture directly below these words) you may have already guessed: Lohan wants herself some Brody Jenner. Until now, Jenner's conquests have remained from the reality television set, hitting up Kristin Cavallari, Nicole Richie, and LC from The Hills, so Lindsay Lohan? That's totally an upgrade in the fame department. Here's more: 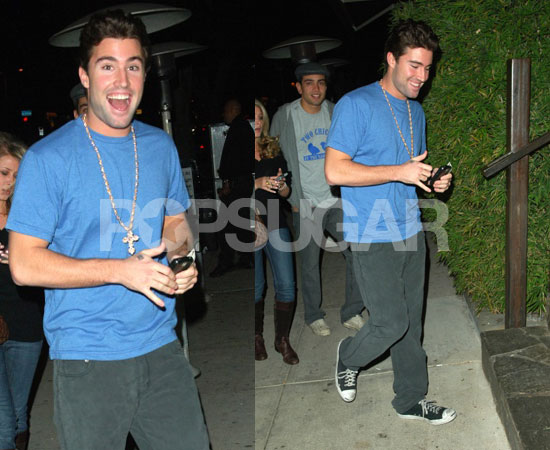 Usmagazine.com has learned that Lohan, 20, who entered L.A.'s Wonderland rehab center on Jan. 18 to treat her addiction issues, has been sending bachelor-about-town Brody Jenner, 23, sexy text messages for the last couple weeks.

We've eye-balled one particularly flirtatious sext-message that Lohan sent Jenner - former flame of Kristin Cavallari, Nicole Richie and Lauren Conrad - last Saturday night in which the 12-stepper, among other requests, texted that all she wanted was "McDonald's and sex."

When asked by Usmagazine.com to comment on Lohan's textual pursuit, Jenner, who just signed a deal to be a spokesman for Scope mouthwash, said, "Sorry, dude. I don't text and tell."

Brody has recently been seen out on the town with his ex, Lauren Conrad, but that doesn't mean he can't also provide Linds with the hot Chicken Nugget injection that she so desires. Hey, at least she's not fiending for the booze.