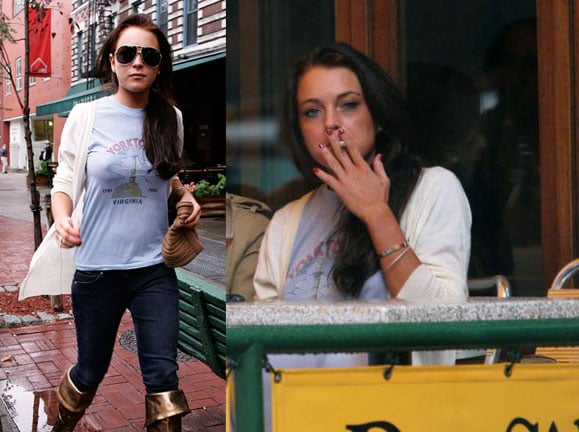 Lindsay Lohan Back in the Hospital

Forget the huge fight LL had with her Mom (more about that crazy story after the jump), the fragile actress has ended up at the hospital once again. I can't keep track anymore as to how many times she has been to the ER this year. This time she fell and hurt her wrist. Access Hollywood reports: Actress Lindsay Lohan has once again been rushed to a hospital, this time for a fractured wrist.

Access Hollywood has learned from a source close to Lindsay Lohan that the actress went to the emergency room at St. Vincent's Friday in New York after sustaining a fall.

She slipped at a fashion week party in New York and her driver took her directly to the hospital. She was supposed to leave for LA today, but after her flight was delayed because of rain, she stayed in Manhattan.

LINDSAY Lohan got into a screaming match with her mother, Dina, in an Upper East Side restaurant, told her to "go to hell" and stormed off, leaving the older woman in tears.
On Thursday night, Lindsay reluctantly joined Dina for Dina's birthday celebration at Phillipe on East 60th Street.

"Lindsay got a call from her mother telling her to come to the party," said a spy. "Lindsay didn't want to go, because her mother was drinking already, but she went anyway."

All was well until the first course arrived.

"When Lindsay got there, her mother and her four friends were into their second bottle of Cristal," said a restaurantgoer. "Right after the first course, they started fighting."

The two began cursing each other in front of other patrons in the crowded Chinese eatery, including Ryan Cabrera, Brandy and Serena Williams at nearby tables. "A mortified" Lindsay finally told her mother to "go to hell!" before she exited. After Lindsay left, Dina started "crying and shaking . . . Dina typed vigorously on her BlackBerry for 45 minutes while her friends were just sitting there, and when the birthday cake came out, she broke out crying again - even louder."

The unhappy birthday girl - who calls herself the "white Oprah" - also made "five trips to the bathroom in 90 minutes and came back to the table sniffling each time," said our witness.

The tired and emotional Dina was so distraught that she started "throwing fortune cookies at the waiters and flipping them off." Finally, after four hours of partying, the $2,000 bill was paid - with no tip for the waiters, who then "had to help her out of the restaurant as it closed down for the night."

Lindsay, meanwhile, seemed to be on her best behavior at the Calvin Klein party at 7 World Trade Center, though she seemed upset by her mom's meltdown. Lindsay was spotted in tears at one point as she mingled with Drew Barrymore, Maggie Gyllenhaal, Mischa Barton, Margherita Missoni and Carine Roitfeld.

Later, having calmed down, she ended the night among friends at Bungalow 8.