Lindsay Lohan was seen freaking out last night. Well actually it was at 6:45 am this morning. Clearly the girl was out partying so what is she doing driving? Also she knows the paparazzi likes to follow her making it dangerous. We wish this was a safer world for our LL but the truth is it's not. Here's more from TMZ: 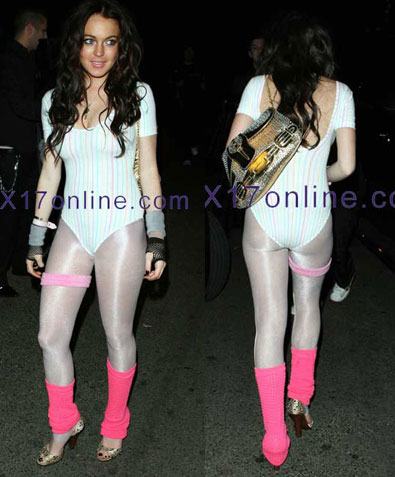 At 6:45 am, a TMZ spy spotted Lindsay at Olive and Sunset in Hollywood, near a dog park. Lindsay was sitting in her parked black Cadillac Escalade and our spy, who was walking his dog, could see Lohan through the tinted windows, "freaking out" and talking on her phone.

Then, Lohan called our spy over and told him that two men in a silver Toyota 4Runner -- parked behind her -- had been following her for the last two hours, trying to "hit" her vehicle. Our spy reports that "she seemed out of it," that it appeared she'd been out all night, and that she'd clearly been crying, with mascara running down her face. "I've called the cops," said Lindsay of her alleged pursuers. "But the cops can't catch them."

What Lindsay didn't even realize in her reduced state was that the two men in the Toyota were actually paparazzi. Our spy saw them snapping away. And, he says, as their vehicle started to creep up on Lindsay's Escalade, she shifted into drive, hit the gas and took off. The paparazzi followed her.

I recommend LL get a driver and some well needed sleep. As for her costume, well at least it's better than the one Paris has on but I'm not sure the heels go so much.