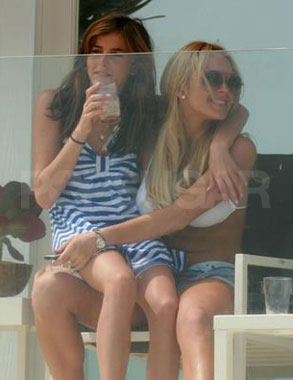 I think the general consensus at this point is that Lindsay Lohan is not back at rehab. Where she is, though, remains a mystery. Two places we will be seeing more LL though is the September covers of both Elle and Maxim. Probably a mixed blessing for both those magazines, though the interviews/photoshoots are long since over by now. In other Lohan news:

"Lohan Insider and Entertainment Correspondent" (whatever that means) Gina Glickman went on Entertainment Tonight to talk about Lindsay's side of the story. According to Gina, the cocaine couldn't have been Lindsay's because she wasn't wearing her own pants -- in fact, she wasn't even sure whose pants they were. Also, Lindsay may not have even been the one driving, there were two other people in the car and Lindsay was "strong armed" into taking the breathalyzer.

Meanwhlie young Ali Lohan sent out her first ever missive about her feelings. She said that Michael Lohan is, "telling all lies to people…my father was never there for us." Also, that Dina is a wonderful single mom and that Lindsay will be okay with the support of her family. Yay.