Lindsay Lohan's father has become an artist while in prison. Who knew he was so talented, but let's hope he really doesn't plan to help troubled teens. It just sounds like a really bad idea. The Lowdown reports: 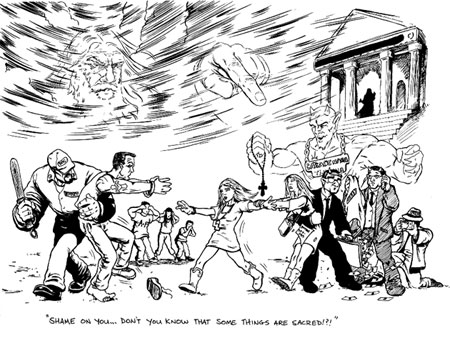 In the 46-year-old Lohan's cartoon, these include money-grubbing lawyers with devil's horns, a prison guard, a paparazzo and an Ugg-booted woman who might be Lindsay's mom, Dina, or her publicist, Leslie Sloane Zelnik. They're all tearing the daughter away from her dear old dad.

"Shame on you," declares the Lord Almighty, who's shown glowering and pointing from heaven. "Don't you know that some things are sacred!?!"

Also depicted - in see-no-evil, hear-no-evil, speak-no-evil poses - are Lindsay's younger siblings, Michael, Alina and Cody. On the back of the cartoon, the artist has scribbled: "The Spiritual Realities and Physical Elements of the truth behind this whole situation."

In his accompanying handwritten letter, Lohan - who's serving up to four years for drunken driving, contempt of court and beating his brother-in-law bloody with a shoe - discusses his "stupid decisions," his new spirituality, an inspirational book he's written and his intention to help troubled teens through a ministry when he gets out of prison.

BWE has a hilarious break down of the cartoon which they are calling Lohan's Family Circus.