Madonna is loving her racy black outfits for photoshoots these days, and her cover for the green issue of Vanity Fair went right along with this trend. We're sure she had plenty to say about her new album and doing all she can for the environment, but yesterday morning she also talked about JT, Britney, and why she'll never sing "Like a Virgin" again. Here are highlights from an interview with New York's Z100-FM: 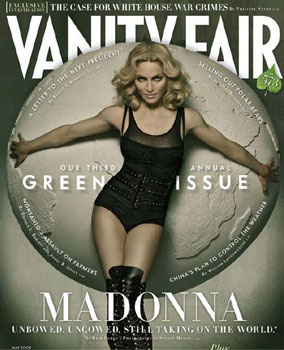 To see what Madonna had to say about Justin Timberlake, just read more

Sounds like Madonna hasn't lost any of her confidence or spunk over the years. As for American Idol, we may never see her grace their stage, but maybe the top contestants will be performing some of her early hits she's put such a high price on. I'd listen to "Holiday" on repeat any day of the week!

MadonnaVanity Fair
Around The Web