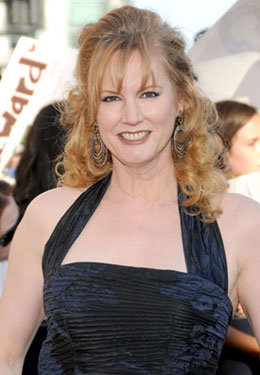 Now that Eclipse has hit theaters and broken box office records, Twilight fans are already anxiously awaiting the next onscreen chapter in Bella and Edward's love story: Breaking Dawn. We talked exclusively to Melissa Rosenberg, the screenwriter behind all of the Twilight films, to find out what we can expect from the final two installments. She weighed in on whether or not Bella's childbirth scene will make it to the screen, shared her most surprising fan moment, and dished on her creative relationship with Stephenie Meyer.

Melissa will be speaking in LA at the Writer's Guild Foundation on Tuesday evening — tune into a livestream here. In the meantime, check out our all-new exclusive interview with her here now.

PopSugar: How did you feel about the decision to split Breaking Dawn into two movies?
Melissa Rosenberg: Relief, actually, because it was going to be quite a challenge to condense such a large book into one movie. That's always the challenge with all of these and, more so, Breaking Dawn. Having a little more room to breathe is nice . . . on the other hand, there's also the challenge of making sure there's enough to fill two movies.

PS: We've heard there are some scenes you want to avoid showing on screen in Breaking Dawn. For example, Bella giving birth. Can you tell us why?
MR: That was a misquote. The childbirth — all the scenes, I feel — should be on screen. I think perhaps what I was referring to was, would we actually see Edward's teeth through the placenta? I don't think so. I don't think we need to see that, and if someone needs to see that, I think they should take a look at that. [Laughs.] I believe it will be implied, but I don't think we'll see teeth in the placenta.

To read the rest of the interview about her craziest fan experience, her favorite scenes to write, and more, just read more.

PS: What responsibility do you feel toward the fans? Are they on your mind during the writing process?
MR: The responsibility I feel to the fans? Well, there's one: making them happy, of course. I want people to enjoy the movie and not feel that I killed their favorite novel! But what I've realized is, you can't satisfy all the people. But the real weight that I feel is a very heavy responsibility, knowing that a lot of women and young girls are seeing this, and watching to make sure that what's portrayed in the film is that Bella's a strong female role model. That the messages they're getting are positive ones.

PS: What's the craziest or most surprising fan reaction you've experienced?
MR: You can't call it crazy, but crazy wonderful. I just came back from Paris. I was there [for a press junket] with some of the actors: Daniel Cudmore, Edi Gathegi, Michael Welch, and Alex Meraz. At the end, there was this closing ceremony and we were told there was a surprise for us, and they led us out on the stage . . . and the entire audience was sort of standing in this darkened theater, almost as if in prayer. It was very odd. And then after a moment, Lady Gaga's "Bad Romance" starts up, and they break into a dance they've been choreographing for three days. This wonderful, very unified dance, and it was amazing. We were stunned. A thousand pairs of hands all raised to the beat at the same time — it's a powerful experience . . . I wondered, could that have happened anywhere else but in France? Would American audiences have been too cool?

PS: How involved is Stephenie Meyer in the writing process and what is your relationship with her like?
MR: Stephenie is very involved. My relationship with her has only gotten better with every movie. When I met her and began to engage, I had no reason to be protective. I found her to be extremely collaborative and a tremendous resource. So I began to engage her more and that happened more on New Moon and even more in Eclipse . . . She weighs in on every draft of the outline, every draft of the script. She's on set. She's very involved.

PS: What is one of your favorite scenes from the books or films? Is there one you've especially enjoyed writing or look forward to writing?
MR: There are a number. I think seeing Bella as a vampire and her adjusting to her powers and embracing them, those are all really fun scenes to write. Particularly when you picture Kristen Stewart playing her, and the way she's embodied Bella as a sort of awkward, fidgety persona. When she turns into a vampire, all of that goes away.

Image Source: WireImage
Exclusive: Twilight Screenwriter Melissa Rosenberg Shares Her Vision For Breaking Dawn and Just How Gory It Will Be!  originally posted on POPSUGAR Entertainment News
Twilight
Around The Web