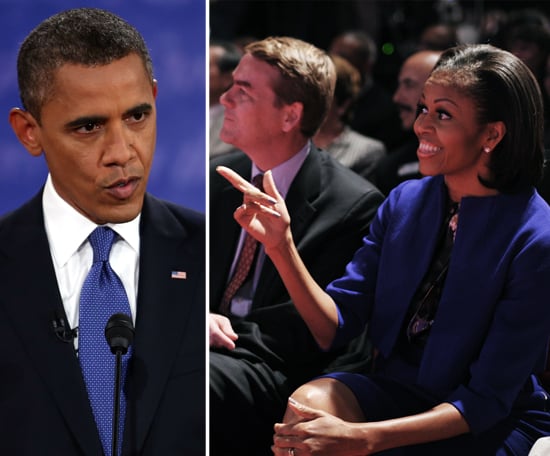 "I'm proud of him," First Lady Michelle Obama told us today when we sat down with her at a campaign stop in Leesburg, VA. During our roundtable interview, Michelle said her husband impressed her during the first presidential debate, even though pundits agreed that Mitt Romney had a better night. The first lady explained, "I think my husband has done a phenomenal job. Not just in the debates, but over these last three-and-a-half years. And I continue to just be in awe at how poised and consistent and honest he is."

The president's consistency impresses the first lady, but she still gets nervous before the debates. Referencing Team USA gymnast Aly Raisman's nervous parents who went viral during the London Olympics, Michelle joked, "You all saw the Olympics with the gymnast's parents who were watching?" She went on, "That's how I feel. But you can't gesture!" Getting animated, the first lady lamented that she couldn't yell "Go baby!" or "Yes!" during the debate. "So I'm right there squeezing my hands and trying to make sure I'm paying attention," she confessed with a laugh.

Michelle Obama also said she gives more thought to everyday Americans she meets on the campaign trail than to the professional pundits, explaining, "There's sort of the scrum and the punditry and the analysis, and then there's the passion that we see every single day — that people are really focused on the choices because the choices are clear." The first lady said that "whether you like the debate or don't like the debate, the truth is that there are a lot of women out there that care deeply about making sure that we and our daughters have the right to make decisions about our own bodies," among other things.

The first lady also noted that the president himself isn't too focused on who "won" the debate. "He doesn't really focus on a debate or a conversation," she admitted. "The one thing he did tell me is that he has got to keep fighting for these folks. That he doesn't want to let anybody down, because he doesn't want anybody to have to go back."

To find out what First Lady Michelle Obama told us about raising her daughters, her husband's passion for the job, and what she hopes to accomplish in a second term and even after her family leaves the White House, stay tuned for the rest of our interview. 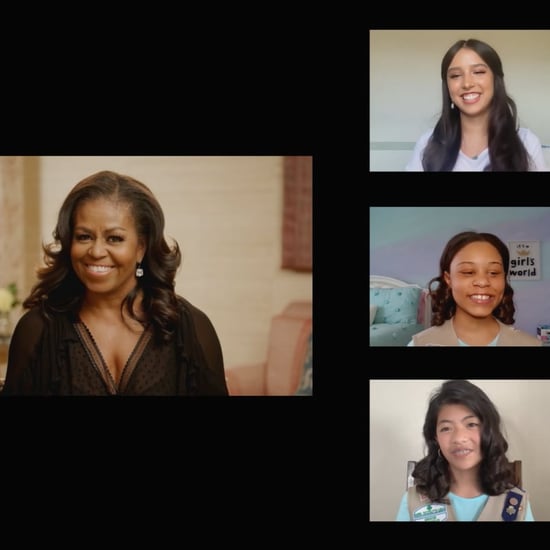 Michelle Obama
In Relatable News, Michelle Obama Can Eat Her Favorite Girl Scout Cookies by the "Sleeve-Full"
by Lauren Harano 5/11