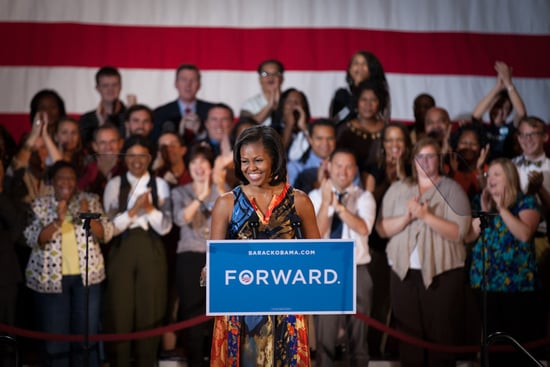 First Lady Michelle Obama shared this op-ed with PopSugar, just one week before the election. Michelle first heard Stacey Lihn’s story at the Democratic National Convention, where she spoke about how her family was able to afford their daughter Zoe’s heart surgeries only because of health reform. Watch the video at the end of this post and remember to get out and vote!

With all the back and forth of campaign season, it might be easy to forget that all these issues we're discussing have a real effect on people’s lives. But as we head into the last week of the campaign, I want to remind everyone that this election is about more than political talking points — it will determine whether millions of people can continue to have access to health care, afford a college education, or even stay in their homes. If anyone thinks I’m exaggerating, just ask Stacey.

Stacey is a mother of two from Arizona. Before her youngest daughter, Zoe, was born, she’d been diagnosed with a congenital heart defect. To save her life, Zoe needed three heart surgeries. She had her first when she was just 15 hours old, a second one at 4 months, and she’ll need a third surgery sometime in the next couple of years.

The Lihns’ insurance plan, like more than half of insurance plans nationwide, included something called a "lifetime cap." This meant their insurance company would only cover Zoe’s medical expenses up to a certain dollar amount for her entire life. But because of the surgeries she required, Zoe had already used up half of that limit by the time she was just 6 months old. That’s right — 6 months old.

To read the rest of Michelle's words, just read more.

So the questions swirled for Stacey and her husband, Caleb. What would they do if Zoe went over her lifetime limit? And how hard would their little girl have to fight with insurance companies for the rest of her life, just to get the health care she needed?

But thanks to the health care reform my husband signed into law, Stacey’s family received a letter saying that Zoe’s lifetime cap had been lifted. And because of the law, insurance companies will no longer be able to discriminate against patients with preexisting conditions.

"Like so many moms with sick children,” Stacey said, “I shed tears and I could breathe easier knowing we have that net below us to catch us if we fall."

But all that could change if health reform is repealed. Some people want to pull that net away from the Lihns and millions of other families across the country. And that’s why this election is so critical.

This Fall, we’ll determine whether moms like Stacey will have to wrestle with insurance companies over things like “lifetime caps” and "preexisting conditions." We’ll decide whether a beautiful little girl like Zoe can be discriminated against for the rest of her life — or whether she can get the health coverage she needs.

If you believe — as Barack and I do — that no family should have to choose between caring for a sick child or going bankrupt, I hope you’ll vote for my husband this fall. Voting is already underway in many states — and you can go to GottaVote.com to find out where and when you can vote in your neighborhood.

And make no mistake about it — your vote will make a difference, not just in who wins and loses on Election Night, but for families like the Lihns and children like Zoe all across our nation.