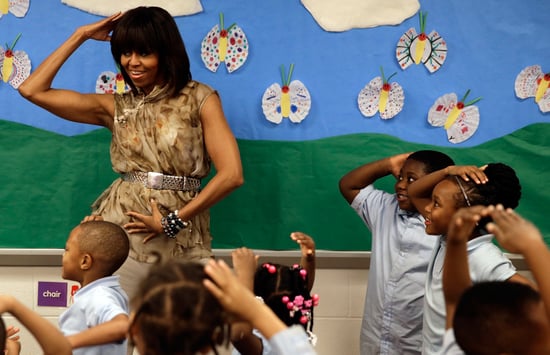 It's a first lady first — Michelle Obama is releasing a hip-hop album. You read that correctly. The album, featuring "artists" like Dr. Oz, will promote her Let's Move campaign, and the kid-targeted selection gets the message across with song titles like "Veggie Luv" and "U R What You Eat." With the help of stars like Jordin Sparks, Ashanti, and Run DMC, the down-to-dougie Michelle has put together 19 tracks and 10 music videos to help fight childhood obesity. The effort follows up on Michelle's partnership with Beyoncé in 2011, when the pair collaborated on a "Move Your Body" workout song and routine for the Let's Move campaign.

The album, titled Songs for a Healthier America, comes out on Sept. 30, but you can take a look at the full track list and one of the music videos below.

Watch Jordin Sparks in the "Everybody" music video below.