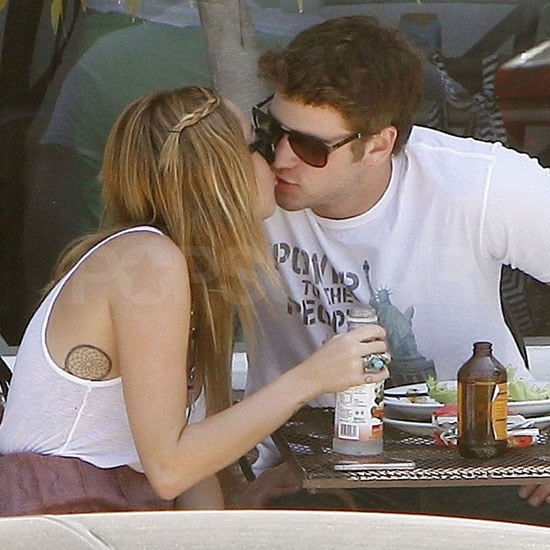 Liam Hemsworth met up with Miley Cyrus yesterday for an affectionate lunch date near her Toluca Lake home just outside LA. She showed off a bit of her dream catcher ink, but Miley kept her new equality tattoo hidden next to her large ring. Liam and Miley are back on the West Coast following their Midwest getaway, and Liam's still sporting his much darker The Hunger Games hair color. Fans of the series got a glimpse of more photos of Liam, as Gale, Jennifer Lawrence, and Josh Hutcherson in newly released pictures from the film. In other news surrounding the franchise, Lionsgate announced plans to release Catching Fire, the second in the series, on Nov. 22, 2013. Meanwhile, Miley recently wrapped up her Gypsy Heart tour in Liam's home country of Australia last month, and now she's gearing up for a new big-screen endeavor. Miley's starring in and coproducing an untitled comedy with her mom, Tish, in addition to promoting her upcoming Fall releases LOL and So Undercover.