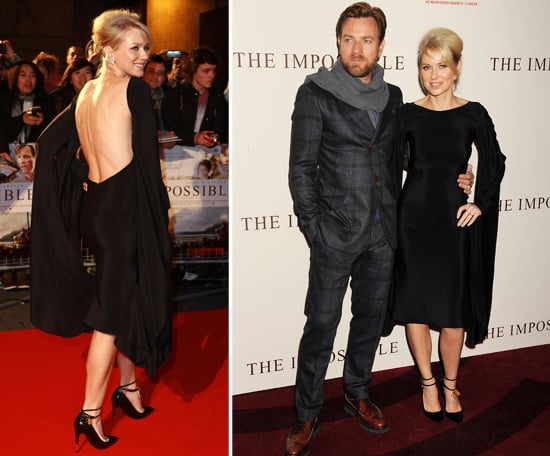 Naomi Watts and Ewan McGregor Bring The Impossible to London

Naomi Watts hit the red carpet alongside Ewan McGregor at the BFI IMAX theater in London last night to debut their movie The Impossible. She showed some skin in a Tom Ford black dress, and Ewan was his typical fashion-forward self in a dark gray checkered suit. She and Ewan's movie is based on the true story of a family of five vacationing in Thailand during the 2004 Asian tsunami, and it arrives in select US theaters Dec. 21. It's actually the second time Naomi and Ewan have worked together; they also costarred in 2005's Stay.

Naomi's partner, Liev Schreiber, wasn't able to attend, since he's back in NYC shooting his own movie. Liev's been logging long hours on the Brooklyn set of Fading Gigolo with Vanessa Paradis. He was, though, able to take a break over the weekend to bring their oldest son, Sasha, to see the Knicks play the Indiana Pacers.