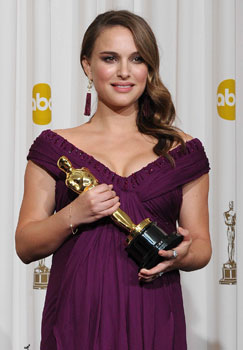 Natalie Portman had both her pregnancy glow and post-Oscar win glow working in her favor when she made her way into the press room. Naturally, she had to field lots of questions about her baby, whom she said thoroughly enjoyed the musical portions of the show. She also discussed baby names and how she came to trust her fiancé Benjamin Millepied while making Black Swan.

On her post-win haze: "It feels very very dream-like right now. I don't really know where I am I suppose."

On whether she'd consider naming her baby Oscar: "I think that's probably, definitely, out of the question."

On how the baby reacted to her win: "I couldn't tell you. I don't really remember anything that happened just now. But the baby was definitely kicking a lot during the song portion of the show. Little dancer."

On her interpretation of the movie: "Well, I think that one of the most beautiful things about the film is that it can be interpreted in so many different ways. I really see it as this young woman's coming of age and that she becomes a woman. She starts out a girl and becomes a woman. By finding her own artistic voice and sort of killing the child version of herself, she becomes a woman. I don't see it necessarily as a death at the end like many people do."

On what she expects from motherhood: "It's one of the most exciting things about being pregnant is that I'm accepting complete unknown. It's a complete mystery and miracle. It's really just accepting that I have no idea, which is what all of us live every day."

To see what Natalie had to say about her fiancé and her post-award season plans, just read more.

On whether her Black Swan character, Nina, should be admired or pitied: "I think Nina is probably both. I think her passion is to be admired but her obvious fragile mental state and fragmentation, her identity is to be pitied."

On what she'll tell her baby about award season: "With my child, I think I will just thank them. It's sort of been a protection. It feels like a protection against all the hoopla and the part that keeps you centered where your meaning is and what is actually important in the midst of shiny stuff that's superficial."

On trusting director Darren Aronofsky and Benjamin Millepied: "Darren, I think it's only possible to give yourself so freely when you absolutely 100 percent trust the person you're working with as a director. You're completely subject to their artistry and Darren's artistry is so extreme that I really felt free to try anything. Benjamin, similarly, to be believable as a dancer I just trusted in him fully to be honest with me, to choreograph in a manner that best flattered what I could do, and best avoided what I couldn't do, and really was catered to making it believable. And he was absolutely the key to credibility for the film, and that was fully on his shoulders."

On whether the role affected her mentally: "When I was working it was really so hectic, we were just working such long days and sleeping five hours a night and there was so much preparation and so much training that I didn't really have time to think about what was happening. I was so exhausted every day. I think that sort of pace helped me stay so focused for the part. This one was a little harder to shake, just the mood of the movie was so intense. It stayed with me a little longer than usual."

On her dreams for herself and her baby: " The next dream I have in terms of very short term future is staying in bed, not having to do my makeup or hair, and keeping my sweats on, relaxing. For my child, to be happy and healthy is what every parent could only wish for."

Natalie Portman
Conflicted About "Feminist Baby Books," Natalie Portman Decided to Update the Classics Instead
by Kelsey Garcia 7 hours ago