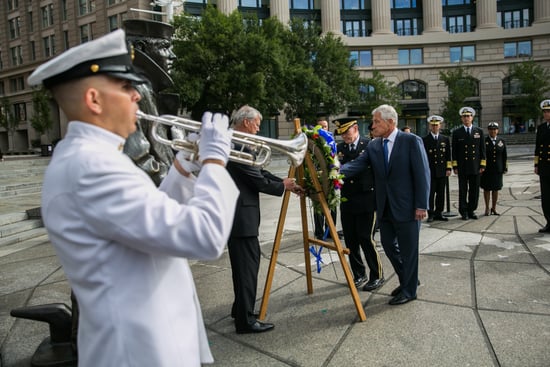 On Monday, a mass shooting at the Washington Navy Yard in DC left 13 people dead — including the suspected shooter. As details of the incident emerged, President Obama addressed the situation. "We're confronting yet another mass shooting," he said, "and today it happened on a military installation in our nation's capital. It's a shooting that targeted our military and civilian personnel. These are men and women who were going to work doing their jobs and protecting all of us. They're patriots. They know the dangers of serving abroad, but today they faced the unimaginable violence that they wouldn't have expected here at home."

On Tuesday morning, Defense Secretary Chuck Hagel laid a wreath at the US Navy Memorial in DC during a ceremony, and flags around the country will be flown at half-mast for the rest of the week. As America begins to process another tragedy, here's what we know.

Who is the shooter?

Aaron Alexis, 34, from Fort Worth, TX, has been confirmed as the suspected gunman who was shot dead by police following the rampage. As of late, he had been working as a civilian contractor and reportedly used a valid security pass to enter the Navy Yard on Monday and had bought his gun legally in Virginia. There are reports Alexis was treated by the VA for mental health issues, including paranoia, sleep disorders, and hearing voices. He had also attended a Buddhist Thai temple in Texas for the past three years.

Alexis had a recent brush with the law in 2010 when he discharged a firearm through a ceiling. According to the police report, "he said that he was trying to clean his gun while cooking and that his hands were slippery." He also was arrested in 2004 for shooting out the tires of a vehicle in Seattle. He told police it was the result of an anger-induced blackout. Alexis, who had won a National Defense Service Medal and a Global War on Terrorism Service Medal, was honorably discharged from the military in 2011 after various misconduct.

How many people are dead?

There have been 13 people confirmed dead, including 12 victims and the shooter. Officials have released the names of the victims, and they all were civilians age 46 to 73. Eight other people, including a DC police officer, were injured. Friends and family members have began to speak out about their losses. A neighbor described victim and retired Navy officer Michael Arnold, 59, as a "wonderful person and a wonderful neighbor." Priscilla Daniels described her husband, who died yesterday, Arthur Daniels, 51, as "a good father and hard worker." The husband of financial analyst Kathy Gaarde, 62, shared these heartbreaking words: "Today my life partner of 42 years (38 of them married) was taken from me, my grown son and daughter, and friends. We were just starting to plan our retirement activities and now none of that matters. It hasn't fully sunk in yet but I know I already dearly miss her."

What was the motive?

No motive is known yet. DC Mayor Vincent C. Gray said there is no reason to suspect it was an act of terrorism.

What do we know about the actual shooting?

The gunman open fired at 8:20 a.m. from the fourth floor of Building 197. He was overlooking an atrium and shot into the cafeteria where Navy workers were starting their workday.

Did the shooter have help?

In the confusion of yesterday's shooting, other people of interest were initially sought. But law enforcement now says Alexis acted alone.

How are officials responding?

The shooting is being treated as a criminal investigation, and the FBI is asking the public for help in determining a motive by calling 1-800-CALL-FBI with any details. "This is an ongoing investigation, it's an ongoing situation on the ground," White House spokesman Jay Carney said Monday. He also said now is not the time for a greater debate on gun control: "It would be inappropriate to try to put in context something about which we have so few facts." But one will surely come.