Nick Lachey made an appearance on The Late Show last night. It's got to be hard on him. No matter where he goes people are always asking about Jessica. And Letterman was no exception. He brought her up almost immediately, and even questioned whether Newlyweds contributed to their divorce. Here's more: 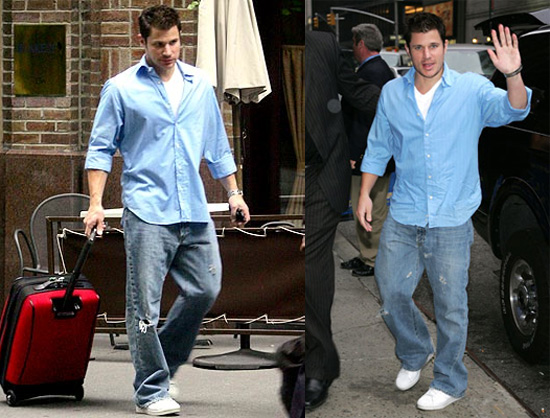 David Letterman: You haven’t been here in quite a long time.

Nick Lachey: It has been a long time.

DL: You were here with your then wife, the lovely Jessica [Simpson].

DL: You were doing a show that was on MTV about being a newlywed at the time and, I don’t want to make you feel, maybe you don’t feel bad, I
can’t tell. But I would think that doing a show like that would maybe actually make the marriage stronger.

NL: Yeah. About that. [Audience laughs] Not so much. I don’t think so...It was among the dumber ideas I think I’ve ever seen executed in history.

DL: But at the time, there was every reason to do that show. People liked it.

DL: Do you think that was why the marriage broke up?

NL: You know that’s one of those things where I think until you get enough hindsight and enough clarity and perspective, I don’t think you can really know what happened. But, I certainly think it was probably a factor.

Like I said, it's got to be tough. But Nick seems to have come out okay on the other side (and more famous as well). To check out the rest of the interview just read more

DL: Are you still friends? Friendly?

NL: We are. And I think both of us have handled it about as well as we possibly could, under the microscope that we’re under and everything. But, I think, again, with time, it’ll give us a better opportunity to redefine our relationship.

DL: Have you learned anything from this?

NL: Absolutely nothing. I knew nothing going in. I know nothing now. No. I think the biggest thing I’ve learned is there’s a premium on keeping your private life private. And I think when you’re in this business, there’s always temptation to say more and say more and I think at some point, you have to draw that line and say, “This is for me. This is for us. And that’s for the public.”

DL: You’ll probably get married again one day though, right?

NL: I don’t know. It certainly hasn’t squashed my concept of love and marriage and all that. I mean, people always ask that, “Do you still
believe in love?” Of course! I think that certain situations are meant to work out and others aren’t. Unfortunately, this one wasn’t.

NL: It wasn’t quite that bad but, I definitely think you go through different phases and there’s certainly a phase of, “Oh, I don’t care about anything—I’m going to throw myself into a little bit of booze and kind of numb the pain.” And I went through a little bit of that and came out on the other side and still have some sobriety left.

DL: You don’t want to tell us who you’re seeing is apparently what you’re saying then?

NL: She will remain nameless. But she knows who she is!

DL: It is important. I dated a girl one time who didn’t know who she was and for me it was easy. [Audience laughs]