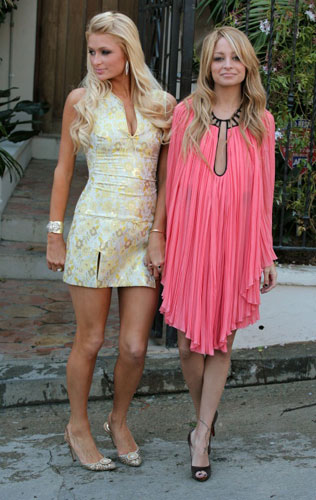 Nicole Richie continues to be plagued by health issues on the set of The Simple Life. A few weeks back it was dehydration that took down the diminutive starlet, but it seems like she still can't stay on her two feet. Sources are saying that she has "had trouble walking and speaking clearly on set." Then last week she reportedly collapsed on location in Malibu and had to retire to her trailer for the remainder of the day. Among others, this behavior apparently isn't going over so well with her co-star Paris. Now, Nicole's rep is saying that Nic suffers from hypoglycemia which can cause dizzyness, fainting and other symptoms when blood sugar gets too low. Hopefully now that she's got a diagnosis, the starlet can get herself eating a little more often and avoid any other health scares!

Paris Hilton
Paris Hilton Debunks the "Stop Being Poor" Tank Top — That's Not What It Actually Said!
by Nikita Charuza 4 days ago