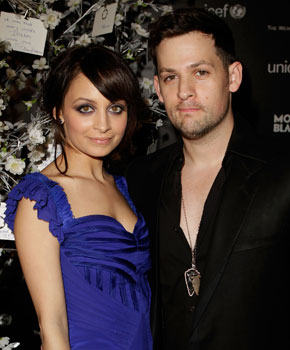 Nicole Richie and Joel Madden tied the knot in LA yesterday after weeks of wedding speculation. The couple exchanged their "I Dos" at her father Lionel Richie's estate, and their friend Rev Run officiated the ceremony. There were approximately 150 guests in attendance, including Samantha Ronson and Khloe Kardashian, who tweeted, "I love weddings!" Nicole and Joel's daughter, Harlow, was the flower girl, and after much deliberation, the bride wore Marchesa. At one point an elephant was seen being led into the party all decked out in a festive headdress. All in all it sounds like an amazing night — congratulations to new husband and wife Joel and Nicole!

Schitt's Creek
Pop the Champagne! Sarah Levy Is Married, and the Wedding Photos Are Simply the Best
by Chanel Vargas 3 days ago