Bad news on the Beckham front. This weekend, only months before his heavily publicized move to play soccer in LA, David Beckham injured his knee in a game. While the extent of the damage isn't yet known, the coach is saying that it could be serious. Sadly, his family was in the stands at the time celebrating Brooklyn's birthday while watching from a luxury box. Here's more: 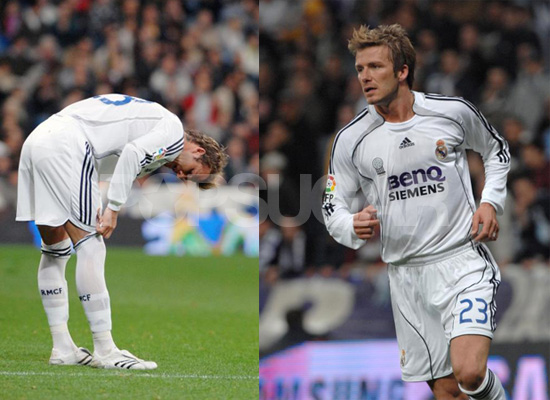 "The day started so well with a birthday party for his son," a family friend tells PEOPLE. "But it ended with medical scans." (Beckham's eldest son, Brooklyn, turned 8 years old on Sunday.) "Both David and Victoria are really anxious at the moment, waiting to hear what the results will be," adds the friend. "It's not a good day for the family."

Before the match on Sunday, the couple had taken sons Brooklyn, Romeo, 4, and Cruz, 2 to a Madrid burger restaurant. "The kids had a ball. It was Brooklyn's eighth birthday party," says the friend. "And all his school friends were there too."

Beckham's hopes of rejoining the English national team this year were also dashed after the injury on Sunday night. Beckham had played well, even firing one shot into the opposition's goal crossbar. "It's difficult to know what is going to happen now," says the Beckham friend. "Everyone is praying this is not major."

So sad, poor Becks. And especially that it had to happen on Brooklyn's birthday. Let's hope David recovers quickly and doesn't need surgery or a long recovery time. We want him in top shape for the LA Galaxy!

UPDATE: It looks like he's out for 6 weeks due to ligament damage. Apparently it could have been a lot worse and it could hurt his chances for the National team but there's hope he's all better for the big move to LA.